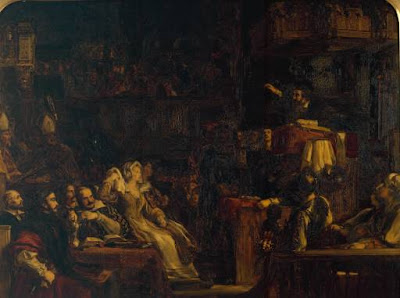 The 450th Anniversary of The Scottish Reformation occurs next year, in 2010

In The Times today, Scotland’s leading historian has challenged the doom-laden image of the Protestant Reformation’s influence on the country and says that, far from being negative, it was a key factor in the flowering of the Enlightenment.

Professor Tom Devine makes the claim in the article marking the 450th anniversary of the Reformation in Scotland, so far largely unmarked. Opposition politicians say the Scottish Government appears to have ignored the anniversary.

One Conservative MSP called on Alex Salmond, the First Minister, to act on Professor Devine’s article.

In response, Michael Russell, Constitution and External Affairs Minister, agreed with much of Professor Devine’s argument, saying that the Reformation was “a decisive moment” in Scotland’s story, but he did not go so far as to pledge an official commemoration.

Jim Murphy, the Scottish Secretary and himself a Catholic, described Professor Devine’s viewpoint as “thought-provoking”.

Peter Kearney, spokesman for the Catholic Church in Scotland, also welcomed what he said was “a sound analysis” of the Reformation’s impact on Scotland.

Professor Tom Devine said: “Arguably, the Scottish Enlightenment's central focus on trying to understand the bases of human conduct, the ideas which evolved in time into the modern subjects of economics, sociology and anthropology, has its roots in Scottish Calvinism’s obsession with human morality and man’s relation to God.”

Professor Devine also points out that far from being “aggressive secularists” who challenged the outdated orthodoxies of Christian tradition, some of the greatest figures of the Enlightenment, such as William Robertson, Adam Ferguson and Thomas Reid, were themselves ministers of the gospel or sons of the manse.

“The Scottish Enlightenment, unlike its French counterpart, was therefore a decidedly Christian Enlightenment which is one key reason why it had such appeal to those Christian gentlemen across the Atlantic as they framed the constitutional foundations of the United States,” he says.

The Scottish Reformation was completely different from the English Reformation. The former has traditionally been seen as a popular movement rather than a change from the top down.

The question is can there be a cool and rational debate on the subject proposed by the Professor which does not re-kindle feelings of sectarianism which have disfigured Scottish society for many a year. One hopes so.

The subject is an important topic. The Scottish Enlightenment had effects far beyond Scotland itself because its ideas and attitudes were carried across the Atlantic as part of the Scottish diaspora which had its beginnings in that same era. As a result, a significant proportion of social developments in the United States and Canada in the 18th and 19th centuries were accomplished through Scots-Americans.

In the Scottish group there was little of the bristling, charged, and exclusionary fervour of the Diderot-d’Alembert circle; or of the ruthless atmosphere found in Germany in the group that included Fichte, the Schelling brothers, and Hegel.


The article reads as follows:

“This summer, 450 years ago, Scotland was in the grip of a revolution. With riots in Perth, and the sacking of churches in St Andrews and Dundee, the Reformation, led by John Knox, had begun to change the face of the nation.

Within six months, the so-called Reformation Parliament had formally declared the country Protestant and independent of Rome. It was a decisive development. With it, the death of medieval Scotland was accelerated and a new nation began to emerge. In time, the actions and policies of the Reformers transformed virtually all aspects of Scottish life: religious practice and authority, culture and education, the national mindset and identity and, not least, a radically new relationship with the auld enemy, England.

English military intervention had saved the infant Scottish Reformation from early destruction at the hands of the professional French forces of the Catholic Regent, Mary of Giuse, and thereafter Protestant England and Protestant Scotland had to remember their joint vital interest against a resurgent Counter- Reformation headed by the European superstates of the time — France and Spain. The Reformation did not lead directly and inevitably to either the Union of Crowns in 1603 or the Union of Parliaments in 1707, but certainly made these momentous developments much more likely.

Next year historians, commentators and journalists will pick over the myths and realities of the Scottish Reformation. There will be plenty of scope for debate and dispute because in virtually all its aspects the story of Protestantism in Scotland is shot through with passionate controversy and contrasting opinion.

In the secular Scotland of this new millennium, the Reformation usually has a bad press. The Calvinist tradition that has moulded the nation is seen through a negative lens. Its malignant influence is said to have spawned intolerance, oppressive social disciplines, an aggressive and rapacious capitalism, sexual guilt and dysfunction, and warped attitudes to music, painting and the creative arts, which have only been changing in recent generations.

There may be some truth in all of these stereotypes, but they reveal only one side of the coin, and entirely ignore the profoundly positive influence which reformed Protestantism also had on Scottish history. I wish to argue here, for instance, that Calvinism was a key factor inspiring that great flowering of intellectual culture in the 18th century, the Scottish Enlightenment. Such an assertion may seem bizarre at first glance. A mere few decades before the age of Hume, Smith, Ferguson and Reid, the young Edinburgh student, Thomas Aitkenhead, was executed for heresy in 1696, five witches were condemned to death and, in the Scottish universities, avenging Presbyterians were on the rampage, purging the institutions of higher learning of those suspected of Episcopalian and Jacobite loyalties.

A rigid and intolerant ideology seemed to hold the country in an unyielding grip. Deviant belief and unorthodox thinking were anathema. Nevertheless, one can still argue that to omit the Calvinist tradition from any explanation of the Enlightenment would be to produce an incomplete and myopic analysis of this remarkable movement of ideas.

We can start with the Reformers’ commitment to developing a basic level of literacy among the population in order that they might read the Bible and comprehend the lengthy sermons which were the new Church’s chosen method of communication with the laity. This issue is complex. Pre-Reformation Scotland was not, as myth often has it, an educational desert. It had three universities, burgh schools and an intellectual elite with very close ties with their distinguished counterparts in Europe. Also, there was no instant educational revolution after 1560. It took over a century before some of the original aspirations of the Reformers became realities.

However, by the 1660s it was normal in the Lowlands at least for every parish to have a school. Before the Union of 1707, Scotland had become a society where there was widespread respect for learning. It was not that the old church ignored education. The key difference after the Reformation was that it was pursued systematically and relentlessly as a crucial part of a nationwide religious crusade.

In addition, to see Calvinism and Enlightenment in direct and inevitable conflict, one with the other, is too simple. Calvinism was a cerebral belief system that appealed more to the mind than the heart or the senses. Complex theological issues were constantly debated in lengthy sermons, learned tracts and public debate.

From this comes the idea of the “latent Enlightenment” in Calvinism, that its very intolerance of drama, image and painting in the sensuous arts drove 17th and early 18th-century Scottish intellectual culture towards philosophy, natural science and jurisprudence. Arguably, the Scottish Enlightenment’s central focus on trying to understand the bases of human conduct, the ideas which evolved in time into the modern subjects of economics, sociology and anthropology, has its roots in Scottish Calvinism’s obsession with human morality and man’s relation to God.

Not surprisingly, therefore, far from being aggressive secularists, challenging the outdated orthodoxies of Christian tradition, some of the greatest figures of the Enlightenment, such as William Robertson, Adam Ferguson and Thomas Reid, were themselves ministers of the gospel or sons of the manse, such as Francis Hutcheson.

The Scottish Enlightenment, unlike its French counterpart, was therefore a decidedly Christian Enlightenment.

By the middle decades of the 18th century, the repression and puritanism that had characterised Scotland in the 1690s had given way to a more tolerant era. Kirk discipline had not disappeared, and moral supervision of the people continued, as Robert Burns found to his cost on more than one occasion.

However, the greater influence of the landed interest on church appointments after the Patronage Act of 1712, the secession of many hardliners from the established Church, and the powerful influence of a new and distinguished generation of university teachers eventually ushered in the Age of Moderatism.

It was a time when most of the intellectuals had little difficulty in reconciling the key tenets of Calvinism with the essentials of the new thinking.

Professor Tom Devine is Sir William Fraser Professor of Scottish History and Palaeography, and Director of the Scottish Centre of Diaspora Studies at the University of Edinburgh “
Posted by Unknown at 6:32 pm