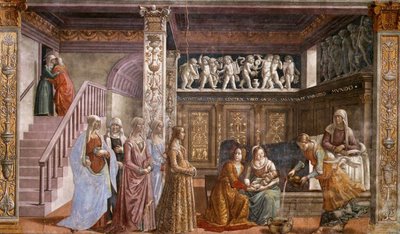 This is the fresco mentioned in the third episode of the BBC Radio 4 programme mentioned below.

Anachronistic depiction of the birth of Mary. The birth as seen as taking place in fifteenth century Florence. Picture the same scene depicted in Twenty first century Britain or America.

On 1 September 1484, Domenico Girlandaio and his brother Davide signed a contract with Giovanni Tornabuoni, a man whose wealth, power and noble descent ensured his position at the side of the Medici. In just four years, between 1486 and 1490, Ghirlandaio and his workshop completed a monumental work that was entirely to Tornabuoni's satisfaction.

Using classical pilasters and entablatures, Ghirlandaio divided the two enormous walls under the wall rib in this Gothic chapel into six horizontally rectangular picture fields. They are placed above each other in three layers and are crowned by a pointed tympanum. The chapel's front wall, in contrast, has three high-pointed arch windows that provide room on either side for three smaller, vertically rectangular pictures, as well as the large tympanum above them. Here Ghirlandaio designed not just the colourful stained glass windows, still at their original location, he also created the altarpiece and its back.

The overall conception of the chapel has been thought through carefully, right down to the direction of the light. Ghirlandaio rigorously integrated into his scenes the way in which the interior was lit through the three windows: the scenes on the left wall are lit from the right, and those on the right wall from the left - as though from the real windows.

It was only possible for Ghirlandaio to produce such an extensive work in four years by using assistants from his large workshop.

The frescoes were recently restored (1996).