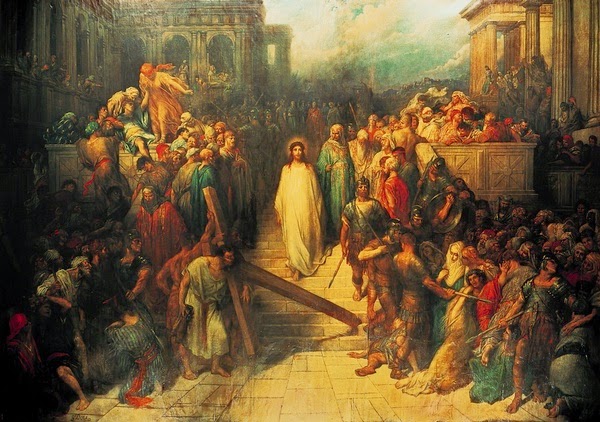 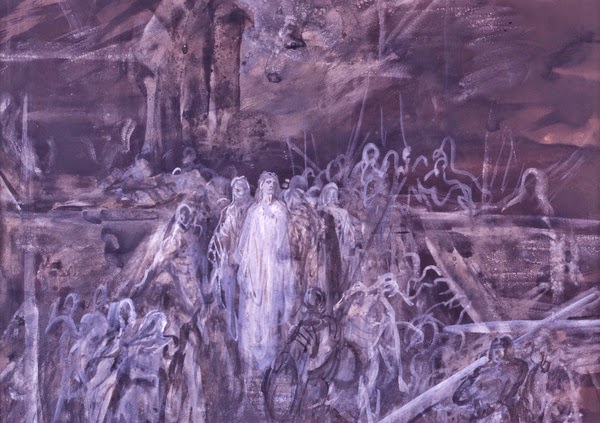 
He called the painting his life`s work or masterpiece

It is monumental in its scale and composition

While working on it he had to leave Paris in 1870 because of the Siege during the Franco-Prussian War and the Comune and its aftermath. Fortunately it survived

He made two other versions. One is in Nantes and the other is in South Carolina

Unappreciated by French critics, Doré  went to London where he and his works were feted

While at the Great Exhibition, he met  George Grove  and Frederick Kill Harford (1832 - 1906) a Minor Canon of Westminster Abbey. Over dinner in Sydenham, they mused over art and the depictions of the Passion and Crucifixion

They noted that there many works on two themes: Ecce Homo, where Pilate shows a scourged Christ to the crowds only for the crowd to ask for mercy for Barabbas; and Christ carrying the Cross

"Pilate, wanting to release Jesus, addressed them again; but they kept shouting: “Crucify him, crucify him!” A third time he said to them: “Why, what evil has he done? I have found in him no ground for the sentence of death; I will therefore have him flogged and then release him”. But they kept urgently demanding with loud shouts that he should be crucified; and their voices prevailed. So Pilate gave his verdict that their demand should be granted. He released the man they asked for, the one who had been put in prison for insurrection and murder, and he handed Jesus over as they wished "(Luke 23:21-25).

"And when they had mocked him, they stripped him of the robe, and put his own clothes on him, and led him away to crucify him" (Matthew. 27:31)

But none on the theme "in between": Christ coming down from the balcony to the place where he would take up his cross

The idea appears to have  been that of Harford. The idea seems to have inflamed Doré`s  interest and imagination as he started work almost immediately and carried on for about ten years on this work

Harford was also a poet, hymn writer, and amateur musician.

He knew London well as can be seen from his book London: A Pilgrimage

Christ is the centre of the work

All lines intersect at his head

On the stairs are Caiaphas, Ananias and Alexander and they are rejoicing

At the bottom of the stairs anguished and distraight are his mother Mary, holy women and John who is comforting Mary Magdalene

Judas is in the crowd with a horrific grin

The soldiers are pushing against the crowd. The features of the crowd show every emotion: curiosity, compassion, pain, hatred, satisfaction

Doré`s reputation as a "preacher painter" was in the last third of his career, following his famous illustration of the Holy Bible in 1866. Soon after, he began many spectacular religious works intended for the Gallery in London he co-founded in 1867-1868, the Doré Gallery .