Byron and the Armenians 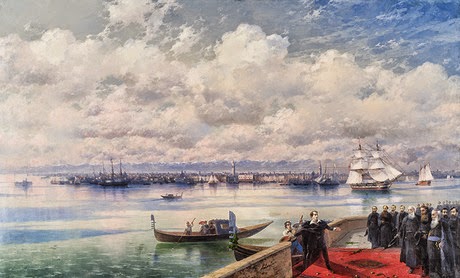 On 26th August 1717, the Venetian Senate, having examined the terms of the offering of the Order of Mendicant Friars, (the Mekhitarists) granted the island of San Lazzaro to Mekhitar of Sebastia and his monks in perpetuity

Byron retired there to study the Armenian language and culture during his visit to San Lazzaro between 1816 and 1817.

He immersed himself in the language

“The English reader will probably be surprised to find my name associated with a work of the present description [The Armenian Grammar] , and inclined to give me more credit for my attainments as a linguist than they deserve.

“As I would not willingly be guilty of a deception, I will state, as shortly as I can, my own share in the compilation, with the motives which led to it. On my arrival at Venice in the year 1816, I found my mind in a state which required study, and study of a nature which should leave little scope for the imagination, and furnish some difficulty in the pursuit.

“At this period I was much struck—in common, I believe, with every other traveller—with the society of the Convent of St. Lazarus, which appears to unite all the advantages of the monastic institution, without any of its vices.

“The neatness, the comfort, the gentleness, the unaffected devotion, the accomplishments, and the virtues of the brethren of the order, are well fitted to strike the man of the world with the conviction that ‘there is another and a better’ even in this life. (…)"