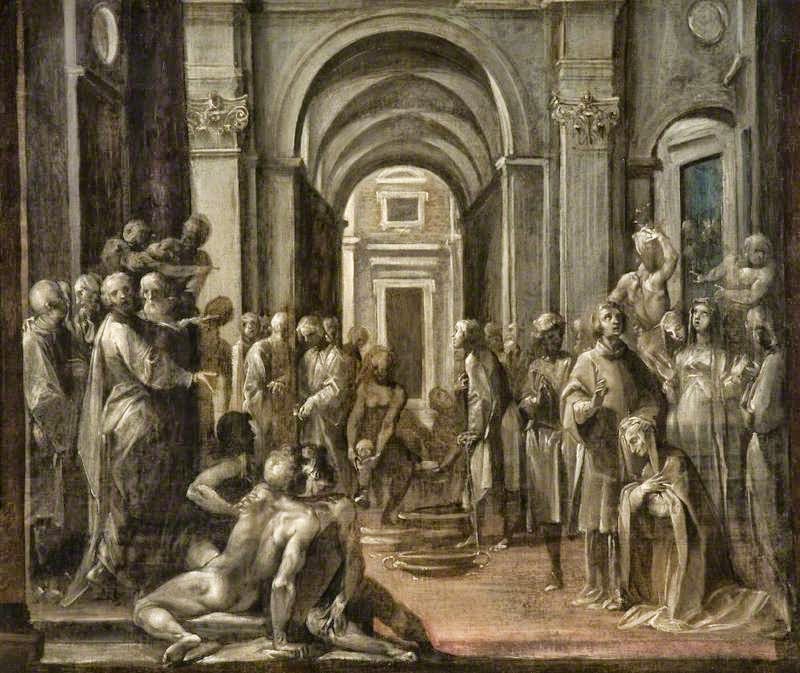 
Cesari painted this monochrome sketch in preparation for a fresco measuring seven or eight metres wide for the church of S. Lorenzo in Damaso in Rome. It has since been destroyed.

The Valerian persecution targetted the Pope, bishops, priests and deacons and was aimed to seize all wealth and material goods of the Church for the Imperial chancellery

He had been entrusted with the material goods of the Church

In the painting Roman officials  demand the Church’s goods. He points to the poor and sick, saying ‘Here is the church’s treasure’

To the right, he heals a kneeling widow. In the centre a blind man is cured and the feet of the poor are washed.

Cesari was born in 1568 in the small town of Arpino, located between Rome and Naples. He was made a Cavaliere di Cristo by Pope Clement VIII and is therefore also known as the Cavaliere d'Arpino

The frescoes in S. Lorenzo in Damaso were his first independent commission in 1588 at the age of 20

For these works he broke with the style of his teacher Circignani. He followed the earlier style of  Girolamo Muziano (1532-1592), a Brescian trained in Padua.

Herwarth Röttgen in his masterwork Cavalier Giuseppe Cesari D'Arpino said that the works were a first step towards a "stile cerimoniale e rappresentativa," characterized by symmetrical compositions, narrative clarity achieved through frontality and schematisation, and a larger, more imposing figure canon

By 1600 he had become the most prominent painter in Rome

In the Louvre is a copy of the drawing which Cesari made for another of the frescoes for S. Lorenzo in Damaso : St Lawrence curing the migraines of the widow of  Cyriaka. Both the original drawing and fresco are now lost. Further below is also a copy of a detail of the same scene 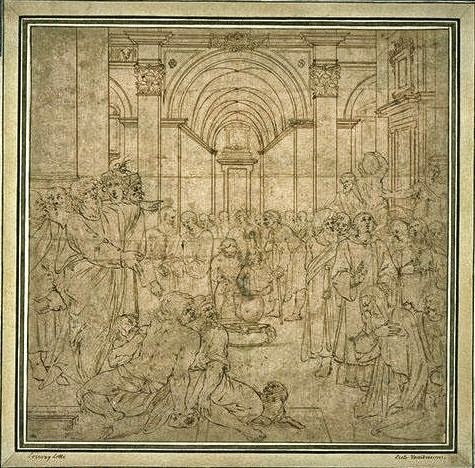 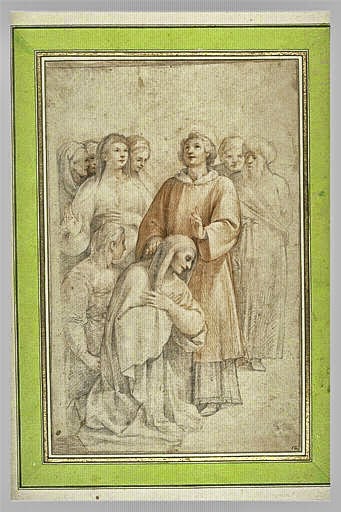 "137. Although we did not act thus without good reason, yet we have followed it up among the people so as to confess and to add again and again that it was far better to preserve souls than gold for the Lord. For He Who sent the apostles without gold [Matthew 10:9] also brought together the churches without gold.

The Church has gold, not to store up, but to lay out, and to spend on those who need.

What necessity is there to guard what is of no good? Do we not know how much gold and silver the Assyrians took out of the temple of the Lord? Is it not much better that the priests should melt it down for the sustenance of the poor, if other supplies fail, than that a sacrilegious enemy should carry it off and defile it? Would not the Lord Himself say: Why did you suffer so many needy to die of hunger? Surely you had gold? Thou should have given them sustenance. Why are so many captives brought on the slave market, and why are so many unredeemed left to be slain by the enemy?

It had been better to preserve living vessels than gold ones.

For what would you say: I feared that the temple of God would need its ornaments? He would answer: The sacraments need not gold, nor are they proper to gold only— for they are not bought with gold. The glory of the sacraments is the redemption of captives. Truly they are precious vessels, for they redeem men from death.

139. These, then, I preferred to hand over to you as free men, rather than to store up the gold.

This crowd of captives, this company surely is more glorious than the sight of cups. The gold of the Redeemer ought to contribute to this work so as to redeem those in danger.

I recognize the fact that the blood of Christ not only glows in cups of gold, but also by the office of redemption has impressed upon them the power of the divine operation.

140. Such gold the holy martyr Lawrence preserved for the Lord.

So, too, the Apostle says: We have this treasure in earthen vessels. [2 Corinthians 4:7 ]What greater treasures has Christ than those in whom He says He Himself lives?

141. These treasures Lawrence pointed out, and prevailed, for the persecutors could not take them away. Jehoiachim, who preserved his gold during the siege and spent it not in providing food, saw his gold carried off, and himself led into captivity.

Lawrence, who preferred to spend the gold of the Church on the poor, rather than to keep it in hand for the persecutor, received the sacred crown of martyrdom for the unique and deep-sighted vigour of his meaning.

Or was it perhaps said to holy Lawrence: Thou should not spend the treasures of the Church, or sell the sacred vessels?

142. It is necessary that every one should fill this office, with genuine good faith and clear-sighted forethought. If any one derives profit from it for himself it is a crime, but if he spends the treasures on the poor, or redeems captives, he shows mercy.

For no one can say: Why does the poor man live?

None can complain that captives are redeemed, none can find fault because a temple of the Lord is built, none can be angry because a plot of ground has been enlarged for the burial of the bodies of the faithful, none can be vexed because in the tombs of the Christians there is rest for the dead.

In these three ways it is allowable to break up, melt down, or sell even the sacred vessels of the Church"