The Death of the Virgin 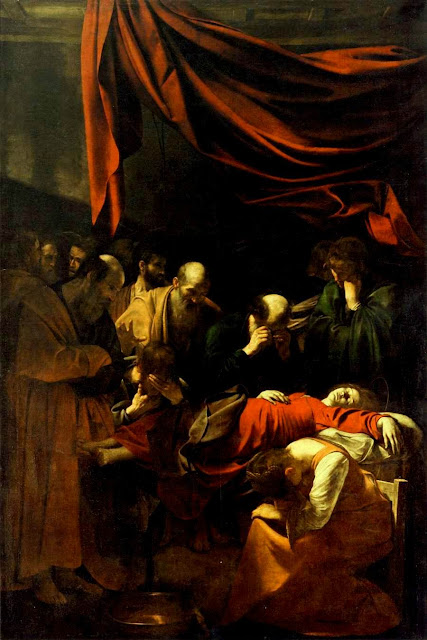 The work was commissioned by Laerzio Alberti, a papal lawyer, for his family chapel (la famiglia Lelmi) in the Carmelite church of Santa Maria della Scala in Trastevere, Rome.
The church was only built in 1593-1610 to honour a miraculous icon of the Madonna. It was sited adjacent to a monastery famous for containing the Papal court's 17th century pharmacy
No sooner was the painting delivered than Caravaggio learnt that it had been rejected.
The Carmelite brothers had reportedly found it ‘well made but without decorum or invention or cleanliness’. To say a picture had been created ‘without invention’ was shorthand for saying that it had been painted from reality rather than the imagination.
Mary looks poor, frail and vulnerable. Wearing a simple red dress, unlaced at the bodice to make her more comfortable in her last moments, she lies stretched out on the makeshift bier of a plank of wood. She looks shockingly dead.
It created a bit of a scandal: no mystical signs about the Virgin (apart from a thin indistinct halo), the head lolls, an arm hangs across a cushion or pillow, the swollen throat and stomach and especially heinous, the bare feet.
At Mary`s deatbed are Saints Mary Magdalene, John and Peter and the other Apostles and disciples. Their obvious grief is quiet and dignified. There is no wailing and gnashing of teeth.
It could be the death of any mother. Indeed therein lies its emotional force. The death of Mary becomes the death of all mothers. All viewers must bring themselves to face this one day if they have not faced already.
Pope Benedict XVI on the Feast of the Assumption (15th August 2005) said:

"And is she [Mary] really so remote from us?
The contrary is true. Precisely because she is with God and in God, she is very close to each one of us.
While she lived on this earth she could only be close to a few people.

Being in God, who is close to us, actually, "within" all of us, Mary shares in this closeness of God. Being in God and with God, she is close to each one of us, knows our hearts, can hear our prayers, can help us with her motherly kindness and has been given to us, as the Lord said, precisely as a "mother" to whom we can turn at every moment.
She always listens to us, she is always close to us, and being Mother of the Son, participates in the power of the Son and in his goodness. We can always entrust the whole of our lives to this Mother, who is not far from any one of us. "

Not long after the rejection, Caravaggio got into a fight with Ranuccio Tommasoni, killed him and Caravaggio was forced to flee Rome. He never returned.
The painting by Saraceni which supplanted Caravaggio`s in the Santa Maria della Scala is below. 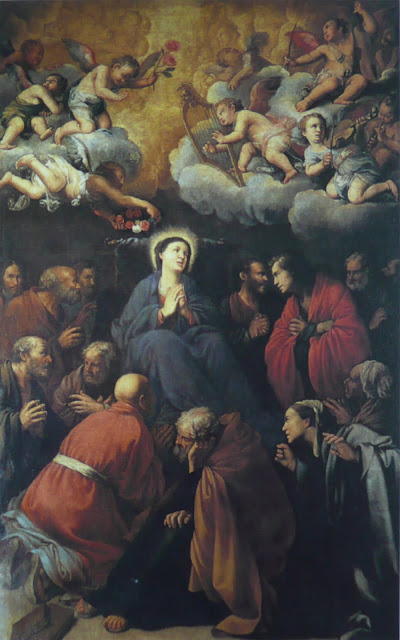