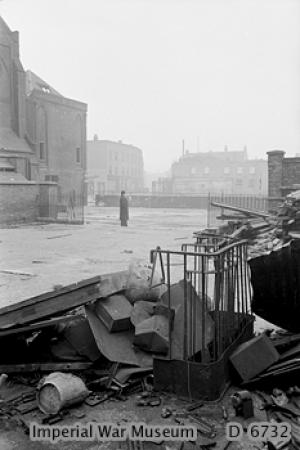 Father Dixon stands on the site of what was once the school attached to St George's Roman Catholic Cathedral, on the corner of St George's Road and Lambeth Road, Southwark.

The original building, opened in 1848, and the first Catholic Cathedral in the UK since the Reformation, was the work of the great Victorian Architect, Pugin.
A great deal of his design remains, and is incorporated into the rebuilt Cathedral.
Pugin was determined to revive the Medieval Church in all its glory. The scale of this ambition is best demonstrated in this drawing, one of the finest Victorian drawings in the RIBA collection. 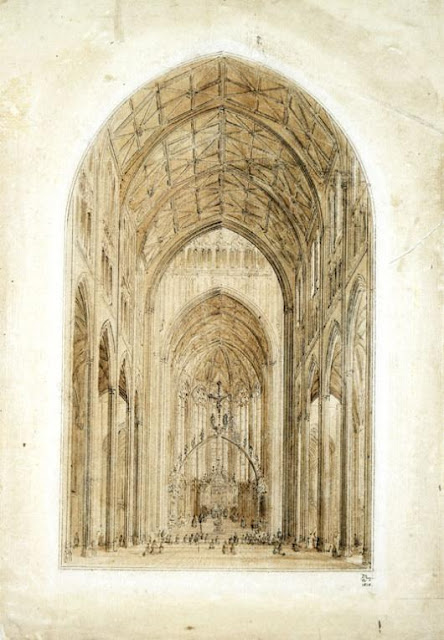 Here is a photograph of the interior prior to the destruction and reconstruction: 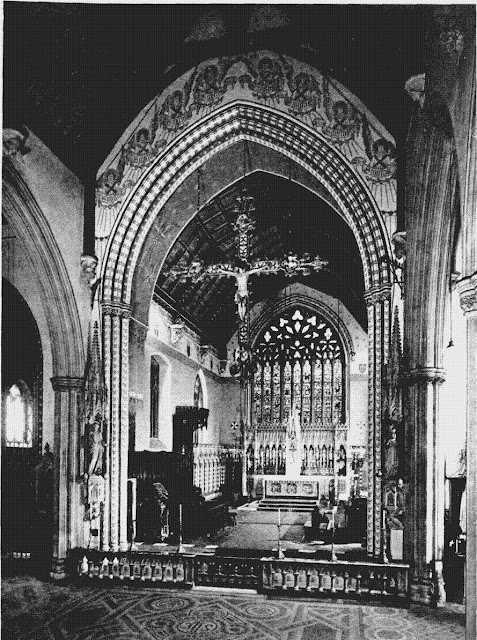 It is now generally agreed that St. George's was not one of the best products of Pugin's genius, but in view of its size, the limitations imposed by the site and the small funds available, it was a remarkable achievement.
Here is an extract of the history of the Cathedral:

"The external appearance is not remarkably striking, and, if it provokes no censure, certainly challenges no extraordinary praise … Within, the nave and aisles are equally unpretending, the pillars which support them being light in structure and fluted; the roof, of plain oak; the side walls and windows perfectly plain … The elevation of the pointed Gothic arches on which the roof rests seems too low for a sublime effect and too high for elegance of detail. The side windows, which are six in number on each side, have not yet been filled with stained glass, and their blank and cheerless appearance, no doubt, added to the naked and hungry aspect of the aisles. A few paintings hung on the walls at intervals scarcely relieved this expression, which may have been designedly introduced by the architect to set off by contrast the extraordinary beauty of the great window and organ gallery at the western entrance, of the stone pulpit in the centre, and of the chancel and chapels of the sacrament and the blessed Virgin on the east … The screen which separates the chancel from the nave is formed on three arches, which rest, like those of the stone pulpit, on highly-polished marble pillars … [It] is in the style of the ancient 'rood lofts'."

The Builder gave a detailed description of the chancel with its carved oak panelling and desks, the decorated stonework of the Sanctuary, and the High Altar of Caen stone with a richly gilt Tabernacle, consisting of four clusters of pinnacles supporting a canopy. It praised the design and workmanship of the altar furniture and suggested that it was in such matters that Pugin's chief excellence lay. "
(From St George's Cathedral', Survey of London: volume 25: St George's Fields (The parishes of St. George the Martyr Southwark and St. Mary Newington) (1955), pp. 72-75. URL: http://www.british-history.ac.uk/report.aspx?compid=65446  Date accessed: 13 June 2010.)

Some images of The Cathedral Today:

Memorial to Provost Thomas Doyle
Posted by Unknown at 9:25 pm