The Pope, Orvieto and Corpus Domini 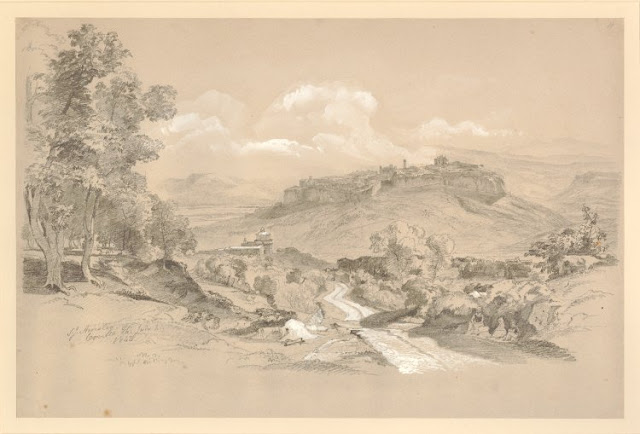 Samuel James Ainsley 1806 - 1874
Orvieto from the E; the city on an isolated cliff-bound hill, the river Paglia winds from the foreground towards the right, a path leads over a slight rise towards trees and over a bridge of many arches. 1842
One of several drawings made on the artist's first Tour of Etruria, June - July, 1842
Graphite, heightened with white; on grey paper
278 millimetres x 441 millimetres
The British Museum, London 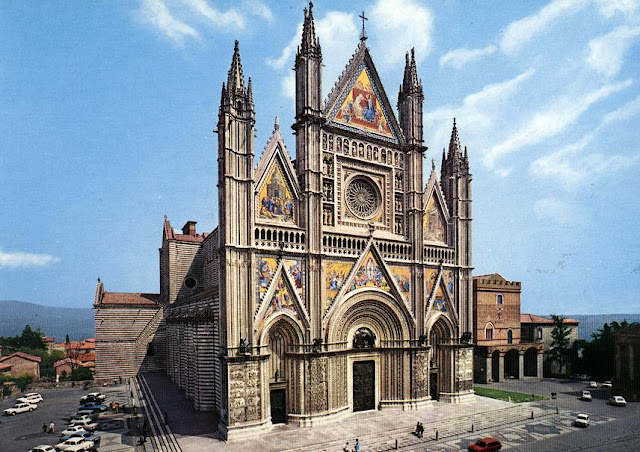 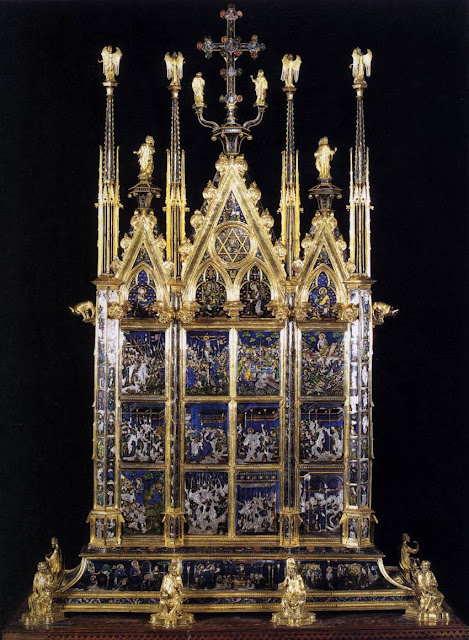 Pope Urban IV (c. 1195 in Troyes, France – October 2, 1264 in Perugia), born Jacques Pantaléon, was the son of a cobbler of Troyes, France
Early in his career he was appointed a canon of Laon and later Archdeacon of Liège (1241).
This was at the time of the institution of the devotion by Julienne de Cornillon and Blessed Ève de Liège.
There he came across the celebration of Corpus Christi then celebrated under the name of "Saint-Sacrement"
He became Pope on 12th August 1261.
Much of the Pope`s and the Papal Court`s time was spent in the city of Orvieto about 60 miles north of Rome.
His last year was mainly spent within the city.
It was from Orvieto that he issued the Bull Transiturus de Hoc Mundo in August 1264. Possibly it was the occurrence of The Miracle at nearby Bolsena in 1263 which was a factor in the institution of the Feast.
It declared that the feast of Corpus Christi be commemorated the entire Latin Rite. This was the very first papally sanctioned universal feast in the history of the Latin Rite.
He apparently commissioned Saint Thomas Aquinas, O.P. (also Thomas of Aquin or Aquino; ca. 1225 – 7 March 1274) to write a special liturgy for the newly instituted Feast.
Sadly Urban IV died in Perugia a few months after the Bull was issued. At that time the Curia was not efficient and not many Letters with the Bulls were issued.
The celebration of the feast was regional and sporadic
Clement V again took the matter in hand and, at the General Council of Vienne (1311), once more ordered the adoption of the feast. He published a new decree which embodied that of Urban IV.
John XXII, successor of Clement V, urged its observance. It was Pope John who canonised St Thomas Aquinas.
In the following extract from her book , The Eucharist in Late Medieval Culture (1991) Cambridge University Press, Miri Rubin discusses the role of Pope Urban IV in the institution of the Feast: 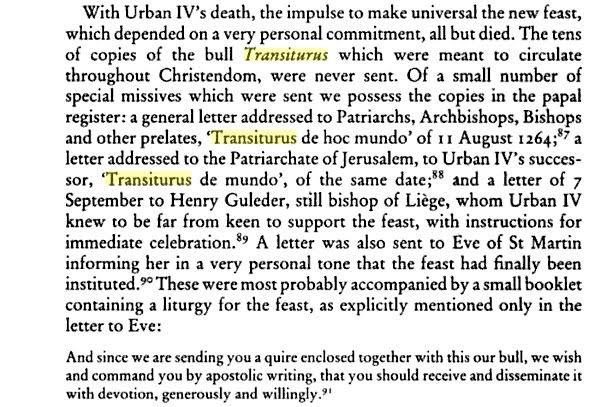 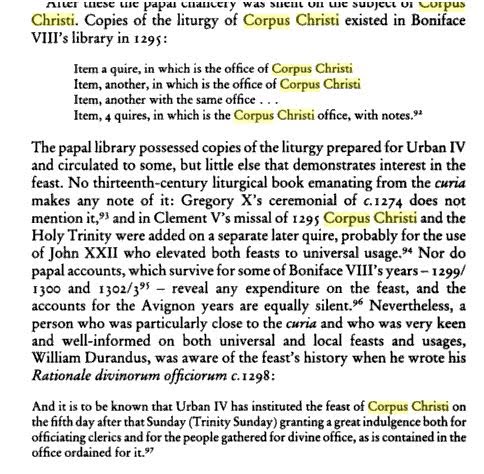 Jeff Pinyan in The Cross Reference gives the following translation:

"Indeed, with regard to this sacrament, He said to the Apostles, “Do this in remembrance of me” (Luke 22:19), that the especial, unique, and manifest memorial of His most excellent love, with which He loved us, might be for us this supreme and august sacrament. Miraculous is the memorial ... in which the sign is renewed and the wonderful things are transformed, in which is contained all delight, in which certainly we obtain support of life and salvation.
This is the saving memorial, in which we bring to mind the dear memory of our redemption, in which we are brought back from evil and built up in goodness, and attain an increase of virtues and graces, in which we most certainly approach the bodily presence of the Savior Himself.
Note, on the one hand how we are gathered together in spirit and mind with those others whose memory we celebrate, but we do not obtain thereby their real presence. [But] in this sacramental commemoration of Christ, Jesus Christ is truly present, albeit under another form, He is truly with us in His very own substance. Indeed, as He was about to ascend into Heaven, He said to the Apostles and to their followers: “Behold, I am with you all days, even to the consummation of the world” (Matt. 28:20), comforting them by the gracious promise, that He would abide and be with them even in his bodily presence.
Transcending every fullness of bounty, exceeding all manner of love, He provides himself in this meal. O singular and admirable, O unique and extraordinary gift, whereby the Giver comes as gift, and the very same is given with the Giver inside.
Therefore, He gives to us himself as sustenance, that, because man had been overcome by death [by food in Eden], even so He might be raised to life by food. A taste [of the food in Eden] mortally wounded man, and a taste [of this food] cured him. See this: because, whence the wound was sprung [from a tree (in the garden)], so came the cure [from a tree (the cross)], and whence death crept in, thence life came forth. Of the former tasting it is written accordingly: “In whatsoever day you eat [of it], you shall die to the death” (Gen. 2:17); of the latter [tasting], it reads truly: “If any man eat of this bread, he shall live for ever.” (John 6:52)
Such an appropriate gift and fitting work of the Holy Spirit came forth, that the Eternal Word of God, who is the food and refreshment of [us] rational creatures, was made flesh, that He may be given as food for a rational creature, for flesh and body, that is, for man. This bread is received [as food], but it is not truly “devoured;” it is eaten, but it is not changed, because in the eating it is not transformed at all, but, if it is received worthily, the one who receives it is conformed to Him" 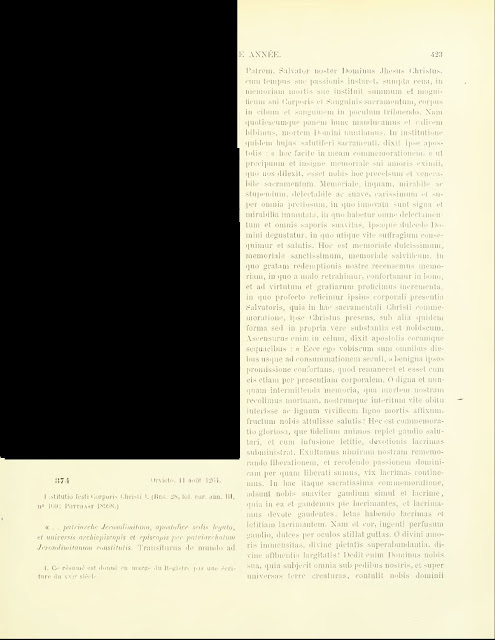 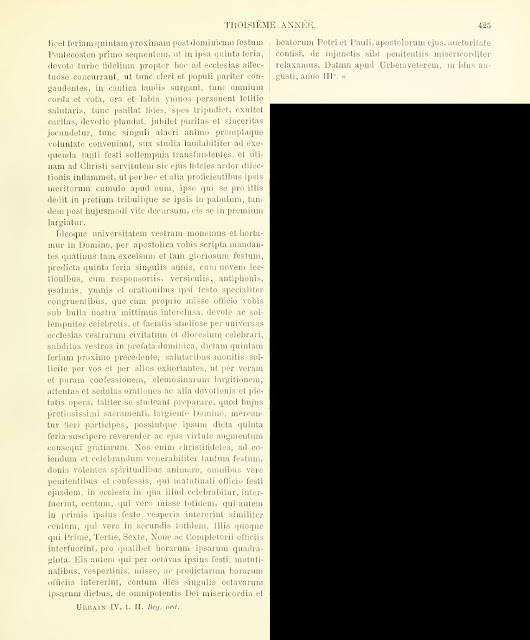