However during the winter of 1938-39, Chamberlain's attitude to Germany noticeably hardened. In part this was due to the violent anti-British propaganda campaign Hitler launched in November 1938, and in part due to information supplied by anti-Nazis such as Carl Friedrich Goerdeler that German armament priorities were being shifted towards preparing for a war with Britain

In particular, Chamberlain was concerned with information that Hitler regarded the Munich Agreement as a personal defeat, together with hints from Berlin in December 1938 that the Germans were planning to renounce the Anglo-German Naval Agreement, regarded in London as the "barometer" of Anglo-German relations in the near-future

He determined on a visit to Mussolini in Rome in early January 1939. He wanted a "heart to heart" with Mussolini. to inspire confidence in British friendship, to help detach Mussolini and Italy from Hitler and Germany, to ask Mussolini to encourage Hitler away from war and further expansion.

Chamberlain thought that the visit was reasonably successful. However it was an unrealistic assessment and the visit certainly did not advance his aims of peace.

While in Rome, he and the Foreign Secretary visited Pope Pius XI on 13th January 1939.

The visit was a private one. There was no official communique leading many outside observers to speculate about what was discussed.

At the time, TIME Magazine wrongly reported that the Pope pressed on the Prime Minister documents dealing with the destruction of Catholic lives and property in Loyalist Spain, and declared that, "as a means of restoring Christianity" to Spain, the Holy See put its hopes in a Franco victory.

According to Owen Chadwick, Britain and the Vatican [Cambridge University Press, pbk edition, 1988, page 19,] by the end of 1938, the British Foreign Office saw the Pope as one of the world leaders in the fight against Nazism and Fascism. However, prior to that time, the Foreign Office held the view that the Pope was a broken reed, useless for any practical purpose of international morality.

However Pope Pius XI had been ailing for a while, and , on November 25, 1938, he suffered two heart attacks within several hours. In February 1939, the situation of the pontiff visibly degenerated. Pius had major pain and difficulties walking. Pope Pius XI died at 5:31 a.m. of a third heart attack on February 10, 1939, aged 81.

Below are copies of the documents in The National Archives with the official reports of the visit by the British representative to the Vatican, Sir Francis D'Arcy Godolphin Osborne (16 September 1884 – 20 March 1964), later the 12th Duke of Leeds who was at present at the meetings.

One other person mentioned in the official papers relating to the visit to Pius XI was Monsignor William Godfrey (25 September 1889—22 January 1963), rector of the English College. At the College, the strict priest was known to his students as "Uncle Bill". On 21 November 1938, he was appointed Titular Bishop of Cius and the first Apostolic Delegate to Great Britain, Gibraltar and Malta. Godfrey, who was the first papal representative to England since the Reformation. He was chargé d'affaires of the Holy See to Poland in 1943, and was made Archbishop of Liverpool on 10 November 1953.

In 1956, Pope Pius XII named him as Archbishop of Westminster and he was made a cardinal by Pope John XXIII in 1958.

William Theodore Heard (24 February 1884 - 16 September 1973) was then Auditor of the Tribunal of the Holy Roman Rota. In 1958 he was appointed Dean of the Holy Roman Rota (i.e. the equivalent of Chief Justice) and was elevated to Cardinal one year later when he was appointed Cardinal Deacon of the titular church S. Teodoro. He was born in Edinburgh. The British press used to refer to him as "the first Scottish Cardinal since the Reformation". 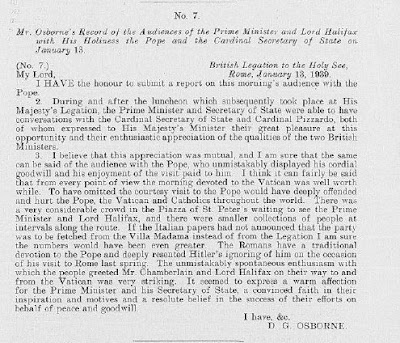 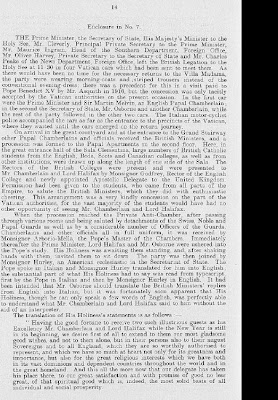 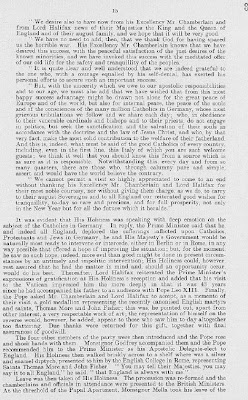 Sir Darcy was British representative at the Vatican during the Second World War.

He was one of the group, which he supported with his own money, led by Monsignor Hugh O'Flaherty who helped conceal some 4000 escapees, both Allied soldiers and Jews, from the Nazis; 3925 survived the war. Their story was portrayed in the 1983 film 'The Scarlet & The Black', starring Gregory Peck.

He also played a key part in a plot in 1940, which involved the Pope (Pius XII) and certain German generals, to overthrow Hitler (See Owen Chadwick, 'Britain and the Vatican During the Second World War', 1988, Cambridge Paperback Library, p. 86 et seq.).

"‘The key figures in the German conspiracy and the chain of command with the Vatican were Muller who worked for German intelligence and was tasked by the leader of the conspirators, Colonel Oster, to strengthen the bonds between the Vatican and the German opposition. At the time, the old leader of the German Centre Party, Monsignor Kaas, lived in Rome.’

‘The German conspirators at first saw the Vatican as a good place to meet allied representatives. It was only later they thought of bringing in the Vatican in order to get some sort of guarantee if they overthrew Hitler. They did not want a return to a Versailles type treaty. Muller, through Kaas, met with the Pope’s Private Secretary, Fr. Leiber in November 1939. Leiber put the plan to the Pope.’

Chadwick writes ‘the Pope was being invited to engage in a conspiracy to overthrow a tyrant, and incidentally to put himself and his aides into those dire risks which attend conspirators’.

On 6 November 1939, Leiber told Muller that the Pope had agreed to put the terms to Osborne. It was helped by the fact that from his time as Nuncio in Berlin, Pius XII knew personally General Beck one of the leaders of the conspiracy. The chain of command was thus: General Beck to Colonel Oster, Oster to Josef Muller, Muller to Leiber, Leiber to the Pope, the Pope to Osborne, Osborne to Halifax, Halifax to Chamberlain. Osborne also had a link which did not pass via the Pope, but through Kaas to Muller. Osborne’s privileged and unique role did not stop there, ‘on 12 January 1940, the Pope told him that he had information from some German Generals. The Pope knew who they were, but withheld the details. Their message was ‘a violent offensive was planned in the west, in the month of February, and using Holland as a route. The offensive need never happen. If the German generals could be assured of an honourable peace which would not be Wilsonian in nature, they would overthrow Hitler and negotiate a reasonable settlement in Eastern Europe – which would restore Poland and Czecho-Slovakia, but keep the union with Austria.

The Pope met Osborne again on 7 February 1940. The Pope told Osborne of Hitler’s plan to invade Belgium and to be in the Louvre by the summer and to find a more worthy site for the Venus de Milo. They then talked of the planned coup in Germany. There was more detail about the exact nature of the proposed German polity, it would eventually be a democratic state, but that might have to wait until a possible civil war had come to an end. The German generals wanted Britain to basically guarantee Munich i.e. that Austria would be in the German Federation.

Osborne sent the material to Halifax. Chamberlain said they needed more detail and to know who the conspirators were. They would then consider it as long as they could bring in the French. On 17 February, Halifax wrote to Osborne asking him to keep open the line of communication. The Pope should be told that the British were ready to discuss; that the French must be brought in; that they must receive definite proposals. Austria should be given the free choice whether or not it went into the Federation. The British were taking the plan seriously.

The British conditions – known to historians as the X-report, were laid before commanding generals Halder and Brauschitsch in the spring of 1940. It is believed that the Gestapo discovered the X-report among the papers which they found in the safe when they raided the intelligence services office at Zossen on 22 September 1944.10 On 27 March when Kaas met Osborne, he told him that the conspirators had laid aside their plans for the time being.

According to Chadwick, the British lost a chance.

The British War Cabinet Papers at the time on the issue are below: 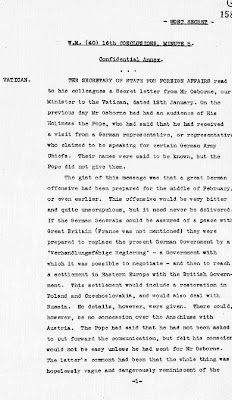 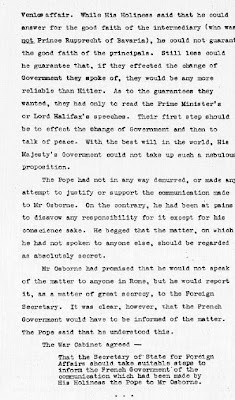