The Devotion of St Teresa of Avila to St Joseph 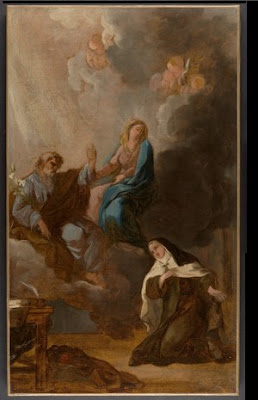 "I took for my advocate and lord the glorious St. Joseph and earnestly recommended myself to him. I saw clearly that as in this need so in other greater ones concerning honour and loss of soul this father and lord of mine came to my rescue in better ways than I knew how to ask for. I don't recall up to this day ever having petitioned him for anything that he failed to grant.

...whereas with this glorious saint I have experience that he helps us in all our needs and that the Lord wants us to understand that just as He was subject to St. Joseph on earth—for since bearing the title of father, being the Lord's tutor, Joseph could give the Child commands—so in heaven God does whatever he commands.

This has been observed by persons, also through experience, whom I have told to recommend themselves to him. And so there are many who in experiencing this truth renew their devotion to him."


"At this same period, on the festival of the Assumption of Our Lady, I was in a monastery of the Order of the glorious Saint Dominic, thinking of the many sins which in times past I had confessed in that house and of other things concerning my wicked life, when there came upon me a rapture so vehement that it nearly drew me forth out of myself altogether. I sat down and I remember even now that I could neither see the Elevation nor hear Mass being said, and later this caused me a certain amount of scruple. While in this state, I thought I saw myself being clothed in a garment of great whiteness and brightness. At first I could not see who was clothing me, but later I saw Our Lady on my right hand and my father Saint Joseph on my left, and it was they who were putting that garment upon me. I was given to understand that I was now cleansed of my sins. When the clothing was ended, and I was experiencing the greatest joy and bliss, I thought that Our Lady suddenly took me by the hands and told me that I was giving her great pleasure by serving the glorious Saint Joseph and that I might be sure that all I was trying to do about the convent would be accomplished and that both the Lord and they two would be greatly served in it. I was not to fear that there would be any failure whatever about this, although the nature of the obedience which it would have to render might not be to my liking. They would keep us safe and her Son had already promised to go with us: as a sign that that was true, she said, she would give me this jewel. Then she seemed to throw round my neck a very beautiful gold collar, to which was fastened a most valuable cross. The gold and stones were so different from earthly things of the kind that no comparison between them is possible: their beauty is quite unlike anything that we can imagine and the understanding cannot soar high enough to comprehend the nature of the garment or to imagine the brightness of the vision which it was the Lord's will to send me, and by comparison with which everything on earth looks, as one might say, like a smudge of soot.

The beauty which I saw in Our Lady was wonderful, though I could discern in her no particularly beautiful detail of form: it was her face as a whole that was so lovely and the whiteness and the amazing splendour of her vestments, though the light was not dazzling, but quite soft. The glorious Saint Joseph I did not see so clearly, though I could see plainly that he was there, as in the visions to which I have already referred and in which nothing is seen. Our Lady looked to me quite like a child. When they had been with me for a short time and caused me the greatest bliss and happiness -- more, I believe, than I had ever before experienced, so that I wished I need never lose it -- I seemed to see them ascending to Heaven with a great multitude of angels. I remained quite alone, but so greatly comforted and exalted and recollected in prayer, and so full of tender devotion, that I stayed for some time where I was, without moving, and unable to speak, quite beside myself. I was left with a vehement impulse to melt away in love for God, and with other feelings of a like kind, for everything happened in such a way that I could never doubt that this was of God, however hard I tried. It left me greatly comforted and full of peace.

As to what the Queen of the Angels said about obedience the point of it is that it was a grief to me not to make over the convent to the Order, but the Lord had told me that it would not be wise for me to do so. He gave me reasons for which it would be extremely unwise and told me to send to Rome, and to follow a certain procedure, which He also described to me. He would see to it that that procedure should bring security. And so it came about. I sent as the Lord had told me -- had I not, we should never have concluded the negotiations -- and it turned out very well. As to the things which have happened since, it proved a very wise arrangement that we should be under the Bishop's obedience, but at the time I did not know this, nor did I even know who that prelate would be. But the Lord was pleased that he should be good and helpful to this house, as has been necessary, in view of all the opposition it has met with, which I shall recount later, and in order to bring it to the state it is now in. Blessed be He Who has brought all this to pass! Amen."

[From St Teresa of Avila, Her Life by herself. ]
Posted by Unknown at 8:52 pm