The Name That Saves: The Healing of the Lame Man 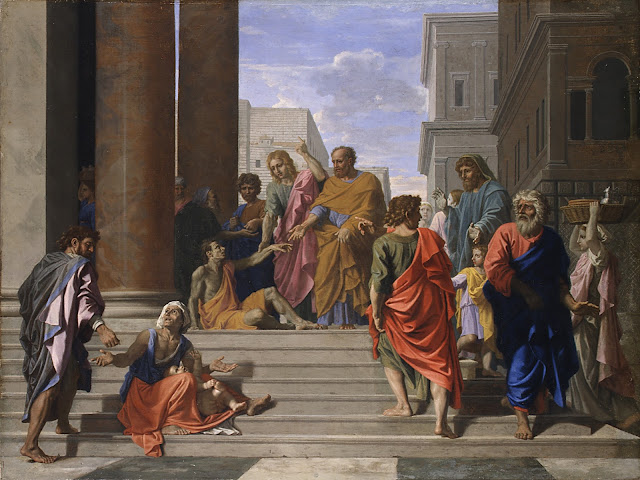 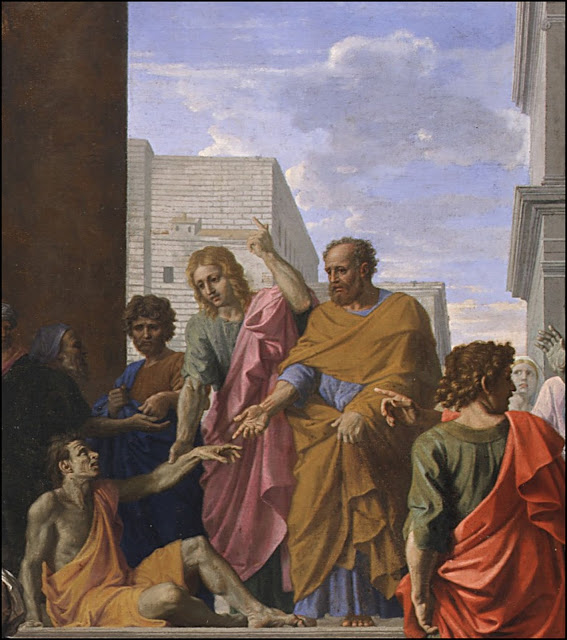 
The catalogue of The Metropolitan says of this work:

The subject of Saints Peter and John Healing the Lame Man, the first miracle performed by the Apostles after the death of Christ, is taken from Acts 3:1–10.

At the gate of the Temple of Jerusalem a lame man begging for alms is miraculously cured by Peter, who asks him to rise up and walk, and John, who touches his arm and points to heaven—the true source of the miracle.

The stairs, at the top of which this encounter is staged, are animated with carefully balanced figure groups, not unlike Raphael's 1508 fresco of the "School of Athens" (Vatican Museums).

Some of the witnesses express amazement, while others simply go about their business.

The young man on the second step gazing toward the right has been borrowed from Raphael's fresco.

The facial type of the lame man and, to a great extent, his pose are closely modeled on the figure in Raphael's cartoon of this subject, and the hands of Saint Peter and the lame man recall those of Adam and God the Father in Michelangelo's famous "Creation of Adam" in the Sistine Chapel ...

[M]ade  for Monsieur Mercier, treasurer at Lyons, in 1655 (see Refs. Félibien 1685 and Loménie de Brienne 1695). According to Loménie, it passed from Mercier to a Monsieur de Bordeaux, a financial official, and then to his secretary. All of this must have taken place within a brief time frame, as the picture clearly belonged to the painter Jacques Stella by 1657, the year of his death.

It is believed that Poussin painted in the mid-1650s, suggesting it is a deliberate attempt to equal or excel Raphael's tapestry cartoons of the Acts of the Apostles

All in all, an important work and one seen as such by the artist and his contemporaries. It is more than just an essai on Cityscapes rather than Landscapes

The fact that the hands of Saint Peter and the lame man recall those of Adam and God the Father in Michelangelo's famous "Creation of Adam" in the Sistine Chapel is not perhaps a mere detail.

The event takes place after the Crucifixion, after the Resurrection, the Ascension and Pentecost

The aftermath of the event is more instructive. It demonstrates the importance and significance of the event. It is  related in Acts 4

The Sanhedrin  was an assembly of twenty to twenty-three men appointed in every city in the biblical Land of Israel.

This court dealt with only religious matters. The Great Sanhedrin was made up of a Chief/Prince/Leader called Nasi (at some times this position may have been held by the Kohen Gadol or the High Priest), a vice chief justice (Av Beit Din), and sixty-nine general members.

In the Second Temple period, the Great Sanhedrin met in the Hall of Hewn Stones in the Temple in Jerusalem.

This was the Court before which Christ was condemned. At that time Peter issued his three denials of Christ

He is pointing upwards. We recall John 5  and the healing of the lame paralytic by Christ on the Sabbath at the Pool of Bethesda in the temple area in Jerusalem

Christ is attacked by the Temple authorities because  he not only broke the sabbath but he also called God his own father, making himself equal to God

But we also recall Christ`s words about Resurrection and Eternal life:

"Amen, amen, I say to you, whoever hears my word and believes in the one who sent me has eternal life and will not come to condemnation, but has passed from death to life.

25 Amen, amen, I say to you, the hour is coming and is now here when the dead will hear the voice of the Son of God, and those who hear will live.

27 And he gave him power to exercise judgment, because he is the Son of Man.

28 Do not be amazed at this, because the hour is coming in which all who are in the tombs will hear his voices

30 I cannot do anything on my own; I judge as I hear, and my judgment is just, because I do not seek my own will but the will of the one who sent me.

What has changed since Peter was last up before the Sanhedrin, or the time that Christ cured the lame man in the Temple precincts to the fury of the members of the Sanhedrin?

The Crucifixion ? No. Alone that would have been a single tragic event which, as Pope Benedict XVI, said illustrates "the absurdity of being"

It is quite simply that decisive event  called  The Resurrection.

Pope Benedict XVI explained it in his Catechesis on St Paul in 2008: Saint Paul (11) The Importance of Christology: the Decisiveness of the Resurrection.

With these strong words from the First Letter to the Corinthians, St Paul makes clear the decisive importance he attributes to the Resurrection of Jesus. In this event, in fact, lies the solution to the problem posed by the drama of the Cross.

The Cross alone could not explain the Christian faith, indeed it would remain a tragedy, an indication of the absurdity of being.

The Paschal Mystery consists in the fact that the Crucified man "was raised on the third day, in accordance with the Scriptures" (1 Cor 15: 4), as proto-Christian tradition attests.

This is the keystone of Pauline Christology: everything rotates around this gravitational centre. The whole teaching of Paul the Apostle starts from, and arrives at, the mystery of him whom the Father raised from the dead.

The Resurrection is a fundamental fact, almost a prior axiom (cf. 1 Cor 15: 12), on the basis of which Paul can formulate his synthetic proclamation (kerygma).

He who was crucified and who thus manifested God's immense love for man, is risen again, and is alive among us. "

Benedict went on to say:

"In synthesis, we can say with Paul that the true believer obtains salvation by professing with his mouth that Jesus is the Lord and believing in his heart that God has raised Him from the dead (cf. Rm 10: 9).

Important above all else is the heart that believes in Christ, and which in its faith "touches" the Risen One; but it is not enough to carry our faith in our heart, we must confess it and bear witness to it with our mouths, with our lives, thus making the truth of the Cross and the Resurrection present in our history.

In this way the Christian becomes part of that process by which the first Adam, a creature of the earth, and subject to corruption and death, is transformed into the last Adam, heavenly and incorruptible (cf. 1 Cor 15: 20-22 and 42-49).

This process was set in motion by the Resurrection of Christ, and it is, therefore, on this that we found our hope that we too may one day enter with Christ into our true homeland, which is in Heaven. Borne up by this hope, let us continue with courage and with joy."

Pope Francis spoke of the Trial of St Peter and St John  in his homily today.

He discussed the speech of St Peter to the Sanhedrin following on his cure of the cripple. It is reported by Vatican radio: under Learning to trust in the name that saves

"We can only be saved in the name of Jesus Christ, no-one else can save us, not fortune tellers or tarot card readers.

On Friday Pope Francis continued his reflections on how the Resurrection shapes our lives and human history during morning Mass in the Domus Sanctae Marthae chapel with employees from the Vatican Pharmacy.

Commenting on the readings of the Friday the Octave of Easter, the Pope recalled St. Peter's words: " There is no salvation through anyone else."

Peter, who had denied Jesus, now with courage, in prison, gives his testimony in front of the Jewish leaders, explaining that it is thanks to the invocation of the name of Jesus that he has healed a cripple. It is "the name that saves us."

However, Peter does not pronounce that name on his own strength, rather he is "filled with the Holy Spirit."

Pope Francis then told a story:

"A humble man works in the curia of Buenos Aires. He has worked there for 30 years, he is the father of eight children. Before he goes out, before going out to do the things that he must do, he always says, 'Jesus!'. And I once asked him, 'Why do you always say' Jesus '?'.

“This man never studied theology, he only has the grace of Baptism and the power of the Spirit. And this testimony, did me a lot of good too, because it reminds us that in this world that offers us so many saviors, it is only the name of Jesus that saves”.

“In order to solve their problems many people resort to fortune tellers and tarot cards. But only Jesus saves and we must bear witness to this! He is the only one. "