The Mystical Embrace or Caress 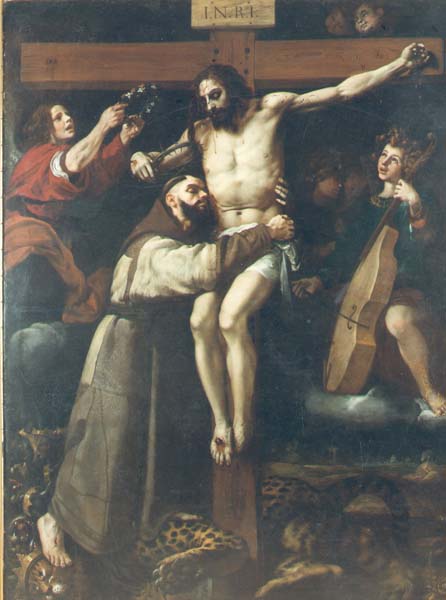 St Francis has approached the Crucified Christ and is embracing him in a mystical vision.

From the Cross Christ raises one arm. He has taken off his Crown of Thorns to place on the head of the saint

An angel stands ready to place a floral garland on Christ

At the foot of the cross lies a prone leopard, conquered by Christ. St Francis crushes the leopard under his foot

In the confusion of middle age, Dante on the day before Good Friday 1300 discovers himself in a dark wood.  Upon arriving at the foot of a mountain and encountering a clear path to continue his journey, three beasts—a leopard, lion, and she-wolf—confront him. He has to return to the dark wood to escape the beasts.

The leopard simply blocks his path, without advancing toward him.

…and it did not depart from before my face
but rather so impeded my way
that I was at several turns turned to go back. (1.34–36)

Virgil has to take him on a detour past the beasts through Good Friday to eventually come again to the foot of the mountain, to the road of salvation

The commentators have disputed the meaning of the three beasts.

They represent vices: concupiscence (immoderate desires), violence, and fraud (though some equate the leopard with fraud and the she-wolf with concupiscence). Others associate them with envy, pride, and avarice.

In the Malebolge (Hell for the Sins of Fraud, the deepest pit of Hell) Dante and Virgil encounter Geryon

The triple hydra bears a strong likeness to a leopard:

Pope Francis in his homily in The Lateran said:

God’s patience has to call forth in us the courage to return to him, however many mistakes and sins there may be in our life. Jesus tells Thomas to put his hand in the wounds of his hands and his feet, and in his side.

We too can enter into the wounds of Jesus, we can actually touch him. This happens every time that we receive the sacraments with faith.

Saint Bernard, in a fine homily, says: "Through the wounds of Jesus I can suck honey from the rock and oil from the flinty rock (cf. Deut 32:13), I can taste and see the goodness of the Lord" (On the Song of Songs, 61:4).

It is there, in the wounds of Jesus, that we are truly secure; there we encounter the boundless love of his heart. Thomas understood this. Saint Bernard goes on to ask:
But what can I count on? My own merits?

No, "My merit is God’s mercy. I am by no means lacking merits as long as he is rich in mercy. If the mercies of the Lord are manifold, I too will abound in merits" (ibid., 5). This is important: the courage to trust in Jesus’ mercy, to trust in his patience, to seek refuge always in the wounds of his love.

Saint Bernard even states: "So what if my conscience gnaws at me for my many sins? ‘Where sin has abounded, there grace has abounded all the more’ (Rom 5:20)" (ibid.).

Maybe someone among us here is thinking: my sin is so great, I am as far from God as the younger son in the parable, my unbelief is like that of Thomas; I don’t have the courage to go back, to believe that God can welcome me and that he is waiting for me, of all people. But God is indeed waiting for you; he asks of you only the courage to go to him.

How many times in my pastoral ministry have I heard it said: "Father, I have many sins"; and I have always pleaded: "Don’t be afraid, go to him, he is waiting for you, he will take care of everything".

We hear many offers from the world around us; but let us take up God’s offer instead: his is a caress of love. For God, we are not numbers, we are important, indeed we are the most important thing to him; even if we are sinners, we are what is closest to his heart

It is through the embrace or caress of Christ, the Cross that we vanquish the Beast