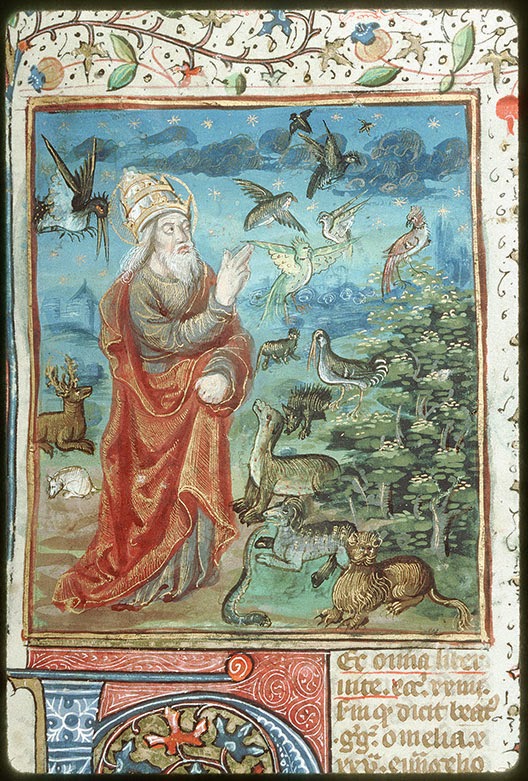 
Nicholas of Lyra (French: Nicolas de Lyre) (c. 1270–October 1349), or Nicolaus Lyranus, a Franciscan teacher, was among the most influential practitioners of Biblical exegesis in the Middle Ages.

Born into a Jewish family, Nicholas of Lyra received baptism and became a Catholic Christian. In 1291 he entered the Franciscan order, in the convent of Verneuil-sur-Avre .

He was a doctor at the Sorbonne by 1309 and ten years later was appointed the head of all Franciscans in France.

Postilla litteralis super Bibliam (1322-31) was, after the twelfth-century Glossa ordinaria, the most widely copied and disseminated of all medieval Bible commentaries .

In Nicholas's own time and for centuries afterward, the Postilla served as a key reference work for scholars who wished to establish the literal sense of a passage and who wanted information on how Jews interpreted particular passages within the Hebrew Bible.

His knowledge of Jewish tradition was drawn from Rashi, whom he transcribes almost word for word, and who also was an advocate of literal exegesis ("peshaṭ").

In his Preface to the Report of the Pontifical Biblical Commission entitled The Jewish People and their Sacred Scriptures in the Christian Bible (2001), the then Prefect of the Congregation of the Faith Joseph Cardinal Ratzinger wrote:

"It is clear that a Christian rejection of the Old Testament would not only put an end to Christianity itself as indicated above, but, in addition, would prevent the fostering of positive relations between Christians and Jews, precisely because they would lack common ground.

In the light of what has happened, what ought to emerge now is a new respect for the Jewish interpretation of the Old Testament.

On this subject, the Document says two things.

First it declares that “the Jewish reading of the Bible is a possible one, in continuity with the Jewish Scriptures of the Second Temple period, a reading analogous to the Christian reading, which developed in parallel fashion” (no. 22). It adds that Christians can learn a great deal from a Jewish exegesis practised for more than 2000 years; in return, Christians may hope that Jews can profit from Christian exegetical research (ibid.).

I think this analysis will prove useful for the pursuit of Judeo-Christian dialogue, as well as for the interior formation of Christian consciousness."