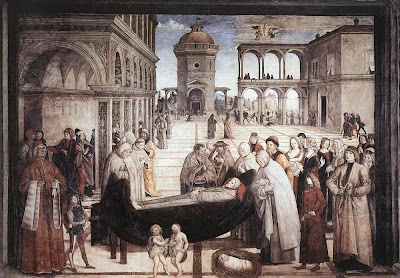 "The following year [1424] brought St. Bernardine of Siena, one of the greatest saints and preachers of his age, to Rome.

This hero of unworldliness and self-sacrificing charity had devoted himself to the care of the sick during the great plague of 1400, when he was but twenty.

He afterwards preached penance to the Roman populace, who had grown wild and lawless during the absence of the Popes. A pure and saintly life gave double power to his words, and the success of his preaching was immense. Bloody feuds which had lasted for years were brought to an end, atonement was made for great crimes, and hardened sinners were converted.

“On the 21st June, 1424," writes the Secretary of the Senate, Infessura, "a great funeral pile of playing-cards, lottery tickets, musical instruments, false hair, and other feminine adornments, was erected on the Capitol, and all these things were burned." ...

In 1427, St. Bernardine came again to Rome to clear himself of the charge of heresy, of which he had been accused to the Pope. The occasion was as follows: when the Saint entered a city, he had a banner carried before him on which the Holy Name of Jesus was painted, surrounded by rays. It was set up near the pulpit when he preached; sometimes also, when speaking of the Holy Name, he held in his hand a tablet, on which it was written in large letters visible to all.

By his earnest persuasion many priests were induced to place the Name of Jesus over their altars or to have it painted on the inner or outer walls of their Churches; and it was inscribed in colossal letters outside the Town Hall in many Italian Cities, as, for example, in Siena, where it is to be seen to this day.

St. Bernardine's enemies had accused him to the Pope on account of this veneration paid to the Holy Name, misrepresenting the facts. As might have been expected, the investigation which Martin V. instituted resulted in his triumphant justification; the Pope permitted him to preach and display his banner wherever he chose. Moreover, in order to manifest his innocence the more clearly in Rome, where he had been slandered the Pope himself, with his assembled clergy, made a solemn procession in honour of the Name of Jesus amidst universal rejoicings.

He also commanded the Saint to preach in St. Peter's, and then in other Churches in the Eternal City. For eighty days St. Bernardine devoted himself to these Apostolic labours, which were crowned with the greatest success, AEneas Sylvius Piccolomini, afterwards Pope Pius II., writes: “All Rome flocked to his discourses. He frequently had Cardinals, and sometimes even the Pope himself, amongst his audience, and all with one voice, bore witness to his marvellous power and success.” "
From L. Pastor. History of the Popes Volume 1, pages 232-234

Bernardino was canonized in 1450, only six years after his death, by Pope Nicholas V

St Bernardine died and was buried in L`Aquila. Unfortunately the church where his remains lie was very badly damaged in the recent earthquake.
Posted by Unknown at 4:51 pm