The Celebration and Procession on the Feast of Corpus Christi, 17th June 1462 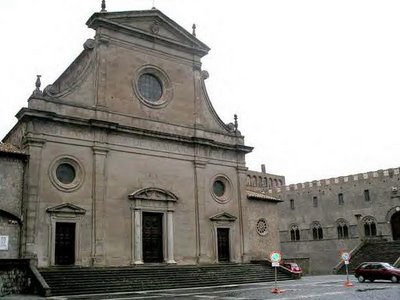 On 17th June 1462, Pius II celebrated the Feast of Corpus Christ in Viterbo. He ordered the town to be decorated for the procession of the Eucharist in a way that would be "fit for the Gods". Everyone in Viterbo collaborated and the whole town was festooned. Tapestries were hung on the walls, arch ways of flowers and plants were placed along the route and the Pope carried the monstrance walking on flower petals which were strewn all along the way in front of him. It is the earliest recorded example of the "infiorata" in the Corpus Christi processions.


The procession itself, which advanced from a vast and gorgeous tent in front of the Church of San Francesco along the main street to the Cathedral, was the least part of the ceremony.


The most ancient building in the city, the cathedral, dedicated to St. Lawrence, was altered in the twelfth and the sixteenth centuries. The capitals of the columns, the two monuments of John XXI, and some frescoes and framed pictures are worthy of note. On the cathedral square stands the episcopal palace, decorated with fine sculpture of the thirteenth century.Here were held the conclaves of Gregory X (1271-73), John XXI (1276), and Martin IV (1282). In the Church of S. Francesco are a Madonna by Sebastiano del Piombo, and the tombs of Adrian V, by Vassalletto, and of Clement IV, by Pietro d'Oderiso.


The cardinals and wealthy prelates had divided the whole distance into parts, over which they severally presided, and which they decorated with curtains, tapestry, and garlands. Each of them had also erected a stage of his own, on which, as the procession passed by, short historical and allegorical scenes were represented.


It is not clear from the account whether all the characters were living beings or some merely draped figures; the expense was certainly very great. There was a suffering Christ amid singing cherubs, the Last Supper with a figure of St. Thomas Aquinas, the combat between the Archangel Michael and the devils, fountains of wine and orchestras of angels, the grave of Christ with all the scene of the Resurrection, and finally, on the square before the Cathedral, the tomb of the Virgin. It opened after High Mass and Benediction, and the Mother of God ascended singing to Paradise, where she was crowned by her Son, and led into the presence of the Eternal Father.


Among these representations in the public street, that given by the Cardinal Vice-Chancellor Roderigo Borgia, afterwards Pope Alexander VI, was remarkable for its splendor and obscure symbolism. It offers an early instance of the fondness for salvos of artillery which was characteristic of the house of Borgia.


The appearance of Corpus Christi as a feast in the Christian calendar was primarily due to the petitions of the 13th century Augustinian nun Saint Juliana of Liège. From her youth she claimed that God had been instructing her to establish a feast day for the Eucharist and later in life petitioned the learned Dominican Hugh of St-Cher, Jacques Pantaléon (Archdeacon of Liège and later Pope Urban IV) and Robert de Thorete, Prince-Bishop of Liège. At that time bishops could order feasts in their dioceses, so in 1246 Bishop Robert convened a synod and ordered a celebration of Corpus Christi to be held each year thereafter.


In 1263, Jacques Pantaléon, now Pope Urban IV, investigated claims of a miracle in which blood had issued from a host at Bolsena near Viterbo where he was in residence. In 1263 or 64 a German priest, Peter of Prague, was on his way to Rome and stopped to say mass in the town of Bolsena.. During the consecration when Peter broke the host a red liquid poured out and it seemed to be bleeding. This miracle was said to have dispelled any doubts Peter had had about the bread and wine offered during the mass actually becoming the body and blood of Christ. He went straight to the Pope, who was staying in Orvieto at time, and reported the incident.


As a result, on 11th August 1264 Urban IV issued the papal bull Transiturus in which Corpus Christi was made a feast day. A new liturgy for the celebration was written by Saint Thomas Aquinas.


It was the first time that a pope had used his authority to impose a new feast on the whole Western Church. It was one of the special group of feasts being celebrated since the Middle Ages: the 'feasts of ideas.' These do not focus on particular events of salvation but have as their object truths of faith, special aspects of Christian teaching and piety, or various titles of the Lord.


Despite the deaths of its early promoters, Juliana and Urban IV, the feast spread rather rapidly to other churches and dioceses. By the end of the thirteenth century it had been adopted in Venice (1295) and Wurzburg (1298), and soon the religious orders followed suite: Cluny (1315), Citeaux (1318), the Franciscans (1319), the Augustinians (before 1326), the Dominicans (by 1324 the entire order adopted it). In Rome, the feast was adopted on 1 November 1317. Pope Clement V, the first pope of Avignon (1305-1314), promulgated the feast anew, and his successor, John XXII (1316-1334), inserted the feast into the collection called Clementines. This collection of canon law (Clementines) was published in October 1317. After these two popes had to reconfirm the solemnity, "the Solemnity of the Body and Blood of Christ" was universally accepted.


None of the three popes mentioned in the early development of the solemnity mention a procession of the Blessed Sacrament. Evidence for an actual procession with the Blessed Sacrament in a monstrance appears for the first time in Cologne between 1274 and 1279. This spreads from village to village, in part because of the masterful, colorful processions, lavish floors, hymns, benedictions and outdoor altars, called stations. The monstrance, in which the large host had been placed, was carried under a festive canopy, preceded by all the clergy and followed by the civil authorities.
Posted by Unknown at 8:33 am