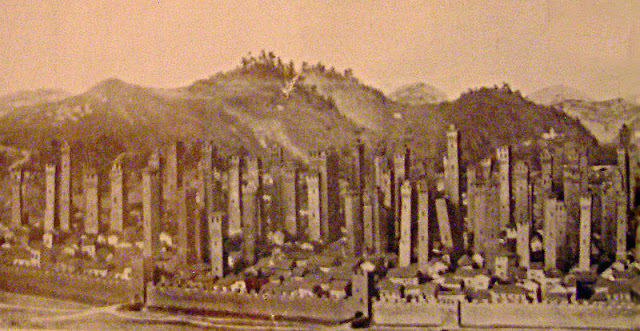 
In art we are used to seeing St Francis preach: to Pope Honorius, the Sultan  and to the Birds

St Francis used to preach a lot - mainly to people. In 1221-1222 St Francis embarked on  a preaching tour in southern Italy

This was no mean city at the time.

At the end of the 13th century, Bologna had between 50,000 and 60,000 inhabitants making it the fifth largest city in Europe (after Cordova, Paris, Venice, and Florence) and tied with Milan as the biggest textile industry area in Italy.

Saint Dominic de Guzmán  had died the year before in Bologna on 6 August 1221 in the Convent which he had made the headquarters of his Order the church of San Nicolò of the Vineyards. The acquisition of the land for the Church was very strongly opposed by the wealthy Loderingo degli Andlò, who owned the land

In accordance with his wishes Saint Dominic was buried there

In late 1223 he helped found amongst other things the Dominican convent of Saint Agnes  in Bologna for women along with Blessed Diana degli Andalò (1201 – 10 June 1236), the sister of Loderingo degli Andlò

It was in this year 1222, when a part of the Studium of Bologna including professors and students withdrew to Padua and helped found the University there

There were many fights and feuds among the nobles and powerbrokers of Bologna. The city was wracked by power struggles The divisions between Guelph (Geremei) and Ghibelline (Lambertazzi) were strong and violent

It was into this bubbling cauldron in the height of summer that St Francis came into the city.

We have an independent record of his visit, the sermon and its effect from someone who was a student in Bologna at the time, a Croat, Thomas the Archdeacon (or Thomas of Spalato) (c. 1200 – 8 May 1268)

In his Historia Salonitana, he records the scene:

“In that same year (i.e. 1222.), on the Feast of the Assumption of the Madonna, when I was attending my studies in Bologna, I saw St. Francis, who was preaching on the square in front of the city palace where almost the entire city had gathered.

And the basis of his sermons were: angels, people, demons. Namely, he explained these three orders of reason-endowed spirits so well and so rationally that many well-schooled people who heard the speech of this unlearned man were awestruck: he nonetheless did not hold an assembly, instead he preached.

Truly the entire content of his words pertained to overcoming hostility and renewing the alliance of peace.

His garments were simple, his personage aroused loathing, his face nondescript. But God imparted so much effect to his words that many of nobles among whom the fierce rage of old hostilities had led to much bloodshed, were thinking of peace.

There was so much reverence and love for this man, that the men and women crowded around him in a throng, attempting to touch the hem of his garment or to tear a piece off.”

Two other students from  the March of Ancona - one named Pellegrino and the other Rinieri. also heard the sermon and joined the Order. The events are narrated in the Fioretti Chapter 27

"St Francis coming one day to the city of Bologna, all the inhabitants went out to meet him, and the crowd was so great that it was with much difficulty he made his way to the market-place, which was filled with men, women, and scholars. And St Francis, on arriving there, stood upon an elevated spot, and began to preach that which the Holy Spirit put into his mind to say; and he preached so wonderfully that he appeared to be an angel, not a man; and his words were like sharp arrows, which pierced through the hearts of those who listened to them. And many men and women were brought to repentance through that sermon; of this number were two noble students of the March of Ancona - one named Pellegrino and the other Rinieri."

These two young men would later be beatified

In the next year 1223 St Francis promulgated his new Rule. It contained a section on preaching:

The friars must not preach in the diocese of any bishop if they have been forbidden to do so by him. And no brother should dare preach to the people unless he has been examined and approved by the minister general of his brotherhood and the office of preaching has been conceded to him.

I also admonish and exhort the brothers that in their preaching their words be studied and chaste, useful and edifying to the people, telling them about vices and virtues, punishment and glory; and they ought to be brief, because the Lord kept his words brief when he was on earth."