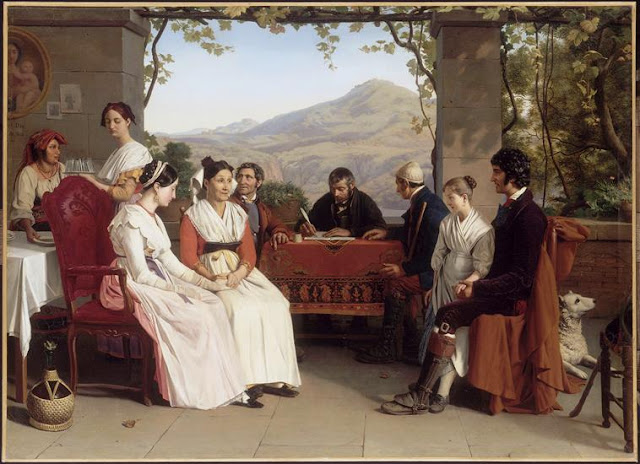 Guillaume Bodinier (1795-1872)
Contrat de mariage en Italie / Contract of Marriage in Italy
1831
Oil on canvas
1.01 m x 1.38 m
Musée du Louvre, Paris
The right of a couple to marry is universally regarded as a fundamental human right. It is a right grounded in the Natural Law.
It is a right which is jealously protected by British Courts and the European Court of Human Rights.
See the summary of The O`Donoghue Case decided by the European Court
Father Ray presents a disturbing story of two Catholic refugees living in Brighton who wish to marry according to the rites of the Roman Catholic Church.
The UK Government in 2005 introduced regulations to prevent such refugees marrying in a Catholic Church unless they marry in an Anglican Church or at certain specified registry offices and paying a substantial fee. The UK Government has admitted that the regulations are unlawful and invalid under the Human Rights Act.
The Church apparently cannot marry the couple according to the Catholic rites as it would be against UK civil law.
One is reminded of the famous Italian novel by Alessandro Manzoni The Betrothed (I Promessi Sposi) engraved into the consciousness of the Italian nation
A young betrothed couple, Lucia Mondella and Renzo Tramaglino, are prevented from marrying because Don Rodrigo, the local feudal lord, wants Lucia for himself. The feudal lord threatens the parish priest Don Abbondio from performing the marriage and the priest succumbs.
All initial efforts to solve the problem fail. Lucia and Renzo are forced to flee and become separated. Their eventual reunion is delayed by a series of vicissitudes triggered by the initial act of oppression. In the course of these they are aided or impeded by a variety of characters.
Eventually through the intervention of Cardinal Federigo Borromeo the couple can and do marry
Father Ray is of course no Don Abbondio. But one does wonder why a more robust attitude is not taken about this situation by the Catholic Church in England and Wales.
Of course the couple in Father Ray`s parish shoud be advised to consult a good lawyer to claim against the UK Government for the breach of their human rights. In the O`Donoghue case, the Court held that the United Kingdom was to pay the applicant 8,500 euros (EUR) in respect of non pecuniary damage, 295 British pounds (GBP) in respect of pecuniary damage and EUR 16,000 for costs and expenses
That should pay for a delayed second honeymoon which might be some consolation (but not much)
Posted by Unknown at 10:48 am