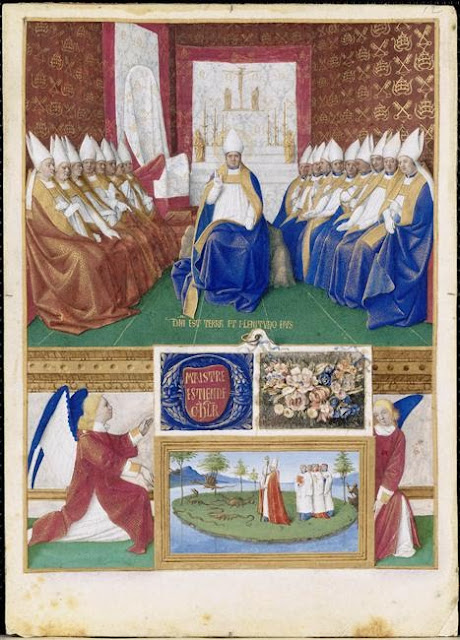 Etienne de Chevalier, (c 1410 - 1470) treasurer to King Charles VII, commissioned Jean Fouquet, one of the greatest artists of the fifteenth century, to create this Book of Hours.
The original miniatures exist as fragments of the Livre d’heures d”Etienne Chevalier (1450-60), forty of whose leaves are at the Musée Condé, Chantilly.
This page from The Book of Hours ilustrates two events from the Life of St Hilary of Poitiers, (c. 300 – c. 368) Bishop and Doctor of the Church
In the large image, St Hilary turned up at one of the many Councils called to resolve the Arian heresy which took up so much time and energy of the early Church. The Council or Synod  was presided over by a heretic (or Arian) pope.  After having forbidden that any place should be given to St Hilary, the pope left the room and died.
St Hilary was then invited to sit between the two rows of bishops enjoying equal rank with them while the papal throne remained empty
In the presence of the Greek fathers he set forth the doctrines of the Gallic bishops, and easily proved that, contrary to the opinion current in the East, these latter were not Sabellians. Then he took part in the violent discussions which took place between the Semi-Arians, who inclined toward reconciliation with the Catholics, and the Anomoeans, who formed as it were the extreme left of Arianism.

St Hilary always took up the anti-Arian view and was even sent into exile at the hands of the pro-Arian side when it was in the ascendant
Hilary was known as "the Hammer of the Arians"
The small image at the bottom illustrates the story of the saint`s stay on the Island of Gallinaria off the Coast of Genova, where the snakes fled in the presence of the saint.
On Wednesday 10 October 2007, the Pope gave a talk about St Hilary and his theology.

""The heaven, which is held in His palm, is again the throne of God, and the earth, which is grasped in His hand, is at the same time His footstool.
This is in order that we might not imagine that the throne and the footstool are an extension of a bodily form as in the position of one who is seated, since that which is His throne and footstool the omnipotent infinity itself grasps with its hand and once more embraces, but that in all these beginnings of created things God might be recognized as in them and outside of them, reaching beyond them and being found within them, that is, poured about everything and permeating everything, since what the palm and the hand grasp reveal the power of His external nature, and the throne and the footstool show that external things are subject to Him as the One who is within, since He who is within rests upon the things that are without.
Thus, He Himself with His whole being contains all things that are within Him and outside of Him, nor is He, the infinite One, separated from all things nor are all things not present within Him who is infinite.
My mind, intent on the study of truth, took delight in these most pious teachings about God.
For it did not consider any other thing worthy of God than that He is so far beyond the power of comprehension that the more the infinite spirit would endeavour to encompass Him to any degree, even though it be by an arbitrary assumption, the more the infinity of a measureless eternity would surpass the entire infinity of the nature that pursues it.
Although we understood this teaching in a reverent manner, it was clearly confirmed by these words of the Prophet:

'Whither shall I go from thy spirit? Or whither shall I flee from thy face? If I ascend into heaven thou art there: if I descend into hell thou art present. If I take my wings early in the morning, and dwell in the uttermost parts of the sea even there also shall thy hand lead me and thy right hand shall hold me.'

There is no place without God, nor is there any place which is not in God. He is in heaven, in hell, and beyond the seas. He is within all things; He comes forth and is outside all things. While He thus possesses and is possessed, He is not included in anything nor is He not in all things."

On Trinity Sunday last year (30 May 2010) Pope Benedict XVI recalled the prayer of St Hilary about the Trinity and Baptism:

"Dear friends, let us make our own the prayer of St Hilary of Poitiers:

"Keep uncontaminated this upright faith that is in me and, until my last breath, grant me likewise this voice of my conscience, that I may be ever faithful to what I professed in my regeneration when I was baptized in the name of the Father, and of the Son, and of the Holy Spirit" (De Trinitate, XII, 57, CCL 62/A, 627).

Invoking the Blessed Virgin Mary, the first creature to be fully inhabited by the Blessed Trinity, let us ask her protection and help to make good progress on our earthly pilgrimage."