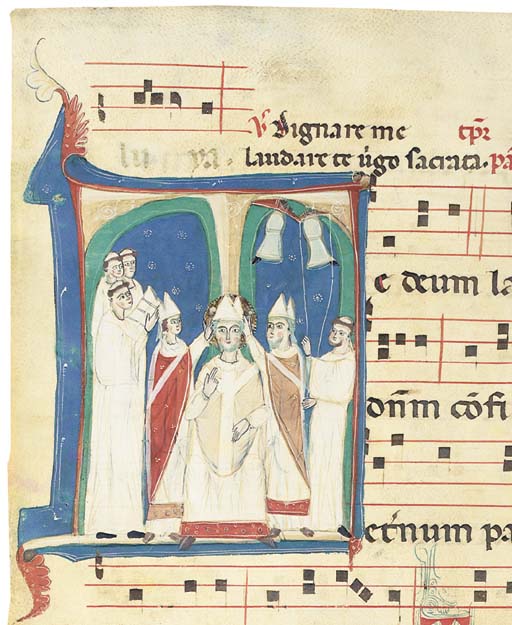 The Consecration of St Ambrose in an Initial "T"
From Illuminated Manuscript Choirbook
Italian 13th Century
Pigment and gold on vellum
233 x 140mm (initial overall)
Private collection
The initial opens the Te Deum from the Office of the Virgin in Eastertide from an Antiphonal.
St Ambrose (c. between 337 and 340 – 4 April 397) was the reputed composer of the hymn. It is said that he composed the hymn when he baptised St. Augustine of Hippo, his celebrated convert.
The depiction of St Ambrose in a choir book is appropriate as he did found a new school of hymnody: the Ambrosian chant
In his Confessions, IX, vii, 15, St Augustine speaks of St Ambrose introducing hymns to be sung "according to the fashion of the East".
Those interested in Ambrosian Chant and Hymns may find an Italian website of interest: Canto Ambrosiano
Posted by Unknown at 9:19 pm