A Most Sublime Prayer 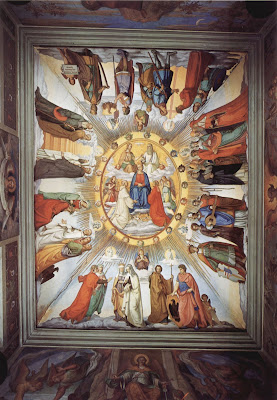 In the final stages of Dante`s Paradiso, Dante approaches the  Empyrean, a heaven of pure light beyond time and space.

Beatrice, his guide in Paradise until then now returns to her place

There appears instead a new guide for the final stage of the celestial voyage: Saint Bernard of Clairvaux (1090-53)

Bernard shows Dante his last vision of Beatrice, who has resumed her throne among the blessed. Across the vastness of Paradise, Dante sends his soul's prayer of thanks to her. Beatrice smiles down at Dante a last time, then turns her eyes forever to the eternal fountain of God.

Bernard, the most faithful of the worshippers of the Virgin, promises Dante the final vision of God through the Virgin's intercession.

Accordingly, he instructs Dante to raise his eyes to her throne. Dante obeys and burns with bliss at the vision of her splendour

His eyes fixed blissfully on the vision of the Virgin Mary, Bernard recites the orders of the Mystic Rose, identifying the thrones of the most blessed.

Mary's throne is on the topmost tier of the Heavenly Stadium. Directly across from it rises the throne of John the Baptist. From her throne to the central arena descends a line of Christian saints. These two radii form a diameter that divides the stadium. On one side are enthroned those who believe in Christ to Come; on the other, those who believed in Christ Descended. The lower half of the Rose contains, on one side, the pre-Christian children saved by Love, and on the other, the Christian children saved by Baptism.

Through all these explanations, Bernard has kept his eyes fixed in adoration upon the Virgin. Having finished his preliminary instruction of Dante, Bernard now calls on him to join in a Prayer to the Virgin.

St. Bernard offers a lofty prayer to the Virgin, asking her to intercede in Dante's behalf, and in answer Dante feels his soul swell with new power and grown calm in rapture as his eyes are permitted the direct vision of God.

There can be no measure of how long the vision endures. It passes, and Dante is once more mortal and fallible. Raised by God's presence, he had looked into the Mystery and had begun to understand its power and majesty. Returned to himself, there is no power in him capable of speaking the truth of what he saw. Yet the impress of the truth is stamped upon his soul, which he now knows will return to be one with God's Love.

In Canto 33 of Paradiso, Dante puts into the mouth of St Bernard the following prayer to the Virgin:

“"O virgin mother, daughter of thy Son,
humble beyond all creatures and more exalted;
predestined turning point of God's intention;

Thy merit so ennobled human nature
that its divine Creator did not scorn
to make Himself the creature of His creature.

The Love that was rekindled in Thy womb
sends for the warmth of the eternal peace
within whose ray this flower has come to bloom.

Here to us, thou art the noon and scope
of Love revealed; and among mortal men,
the living fountain of eternal hope.

Lady, thou art so near God's reckonings
that who seeks grace and does not first seek thee
would have his wish fly upward without wings.

Not only does thy sweet benignity
flow out to all who beg, but oftentimes
thy charity arrives before the plea.

In thee is pity, in thee munificence,
in thee the tenderest heart, in thee unites
all that creation knows of excellence!

Now comes this man who from the final pit
of the universe up to this height has seen,
one by one, the three lives of the spirit.

He prays to thee in fervent supplication
for grace and strength, that he may raise his eyes
to the all-healing final revelation.

And I, who never more desired to see
the vision myself that I do that he may see It,
add my own prayer, and pray that it may be

enough to move you to dispel the trace
of every mortal shadow by thy prayers
and let him see revealed the Sum of Grace.

I pray the further, all-persuading Queen,
keep whole the natural bent of his affections
and of his powers after his eyes have seen.

Protect him from the stirrings of man's clay;
see how Beatrice and the blessed host
clasp reverent hands to join me as I pray."


Saint Bernard’s prayer to the Virgin praises her as the aim and purpose of creation since through her the Son of God was a human being; through her, in turn, human beings return to the Son.

After the Prayer, the rest of the Canto is concerned with the answer to the Prayer to Mary.

But why St Bernard of Clairvaux as the final guide ? Bernard's contemplative mysticism, his devotion to Mary, and his reputation for eloquence .

St. Bernard played a key role in the expansion of the Cistercian order throughout twelfth-century Europe.

He settled schisms. He combated heresy. His numerous sermons, hymns, books and letters survive and his thought and ideas flourish as they did during his lifetime and thereafter.

The cantos with St Bernard of Clairvaux in the Paradiso were apparently well known to Pope John Paul II. He referred on a number of occasions to these cantos and the Prayer of St Bernard (which Pope Paul VI once described as that most “sublime prayer”). Here are some passages from Pope John Paul II:

At the Angelus (Saturday, 8 December 2001) Pope John Paul II said of the words of St Bernard in Canto 32 of the Paradiso:

"1. Today we celebrate the Solemnity of the Immaculate Conception of the Blessed Virgin Mary. We commemorate the extraordinary intervention by which the heavenly Father preserved from original sin the One who would become the Mother of his Son made man. Today the eyes of all believers look to Mary, who is radiant in glory in heaven in the midst of the assembly of the Saints.

Dante's thought in the 32nd canto of the third part of the Divine Comedy, Paradise, comes to mind. St Bernard, the final guide of Dante's journey beyond earth, directs the words to the pilgrim, "Now look upon the face that most resembles Christ, whose radiance alone can dispose you to see Christ" (Paradiso, canto 32, verses 85-87).

St Bernard invites us to contemplate the countenance of Mary, because more than any other creature, the Mother resembles her Son, Jesus. The splendour that radiates from her countenance can help Dante sustain the impact of the beatifying vision of the glorious face of Christ.

2. How precious is the exhortation of the holy Doctor for us pilgrims on earth while we commemorate with joy the "All Beautiful One"! The Immaculate Virgin however invites us not to fix our eyes on her but to pass beyond, and as much as possible, to enter into the mystery in which she was conceived: the mystery of God who is One and Three, full of grace and fidelity.

As the moon shines with the light of the sun, so the immaculate splendour of Mary is totally relative to that of the Redeemer. The Mother leads us to her Son; passing through her, we reach Christ. For this reason, Dante Allighieri notes fittingly: "that her radiance alone can dispose you to see Christ".

In the Homily of Pope John Paul II (Sunday 24 September 2000) at the closing of the 20th International Mariological Marian Conference, he said:

"If Mary is the Theotokos, the Mother of the Only-begotten Son of God, how can we be surprised that she enjoys a quite unique relationship also with the Father and the Holy Spirit?

This relationship certainly does not spare her, in her earthly life, the efforts of the human condition: Mary lived to the full the daily reality of so many humble families of her time, she knew poverty, sorrow, flight, exile, misunderstanding.

Thus her spiritual grandeur does not make her "distant"; she advanced on our road and was in solidarity with us in the "pilgrimage of faith" (Lumen gentium, n. 58). But on this interior journey, Mary cultivated absolute faith in God's plan. Precisely in the abyss of this fidelity is also rooted the abyss of greatness that makes her "humble and exalted more than any creature" (Dante, Par XXXIII, 2). "

"The Rosary is both meditation and supplication. Insistent prayer to the Mother of God is based on confidence that her maternal intercession can obtain all things from the heart of her Son. She is “all-powerful by grace”, to use the bold expression, which needs to be properly understood, of Blessed Bartolo Longo in his Supplication to Our Lady. This is a conviction which, beginning with the Gospel, has grown ever more firm in the experience of the Christian people. The supreme poet Dante expresses it marvellously in the lines sung by Saint Bernard: “Lady, thou art so great and so powerful, that whoever desires grace yet does not turn to thee, would have his desire fly without wings”Divina Commedia, Paradiso XXXIII, 13-15."


"Consequently, through the power of the Holy Spirit, in the order of grace, which is a participation in the divine nature, Mary receives life from him to whom she herself, in the order of earthly generation, gave life as a mother. The liturgy does not hesitate to call her "mother of her Creator" and to hail her with the words which Dante Alighieri places on the lips of St. Bernard: "daughter of your Son." And since Mary receives this "new life" with a fullness corresponding to the Son's love for the Mother, and thus corresponding to the dignity of the divine motherhood, the angel at the Annunciation calls her "full of grace."


A German Romantic painter Veit was the first to revive the almost forgotten technique of fresco painting.

He was strongly influenced by, and joined, the Nazarene movement in Rome, where he worked for some years before moving to Frankfurt.

Marchese Carlo Massimo commissioned the Nazarenes to decorate three rooms of a garden house at his villa with scenes from Dante, Tasso and Ariosto. Veit painted the ceiling of the Dante Room with the Heavens of the Blessed and the Empyrean. In these frescoes and in his Maria Immaculata in Trinità dei Monti (1829–30) Veit proved himself the finest colourist of the Nazarene artists
Posted by Unknown at 8:49 pm