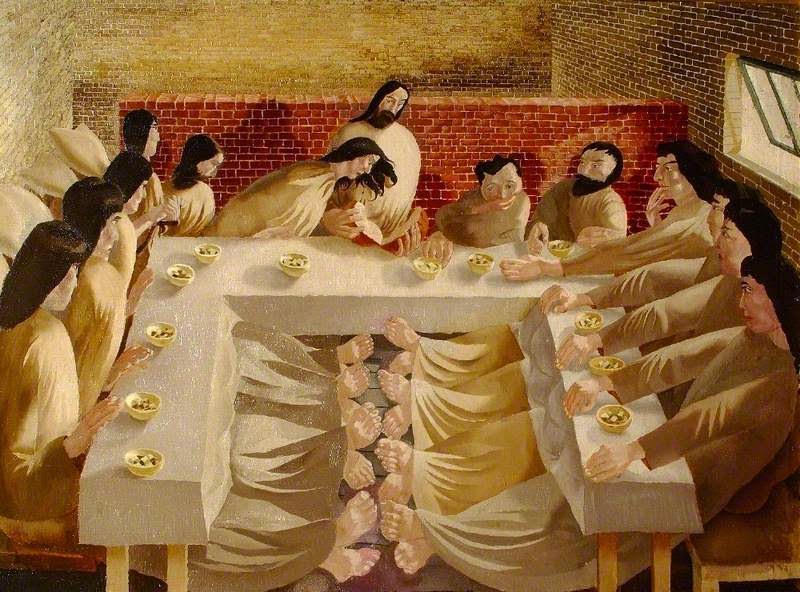 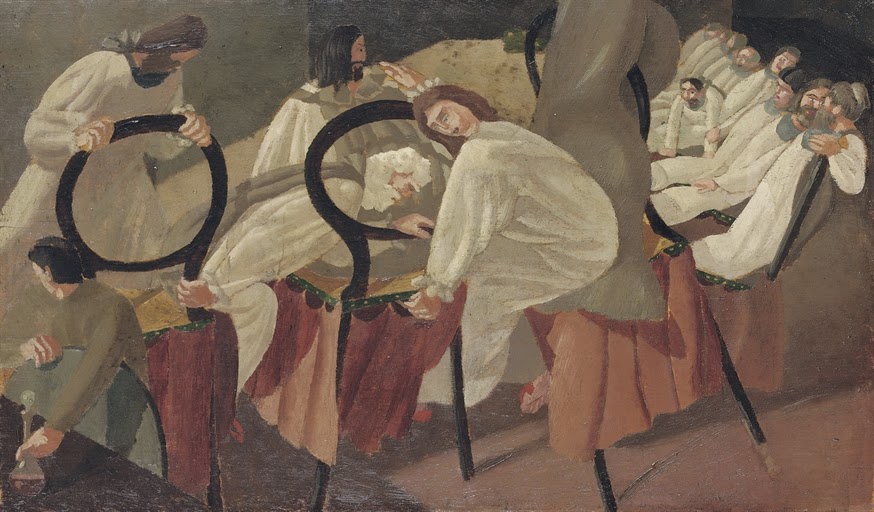 After his war service in the First World War, Spencer returned to his pre-war preoccupation with religious paintings set in the familiar surroundings of his home village of Cookham.

He tried to recover the old feelings

"My ideas were beginning to unfold in fine order when along comes the war and smashes everything. When I came home (from the war) the divine sequence had gone. I just opened a shutter in my side and out rushed my pictures anyhow. Nothing was ever the same again"

On learning that the artist needed a peaceful place to stay and space to work, the Slessers invited him to use their house, "Cornerways," Bourne End, near Cookham.

The Last Supper, 1920 is one  of Spencer’s best known religious works. It is set in Cookham, in one of the deeply atmospheric malt houses that had ‘staggered’ Spencer’s imagination, according to his brother, Gilbert.

It was painted for a private chapel of the prominent Anglo- Catholic and lawyer politician, Sir Henry Slesser. (He converted to Catholicism in 1946)

It certainly is a strange scene

Christ holds bread cut into two like an opened book in his hands. He looks intently (or sceptically?) at the disciple (John?) who is bending over with wavy hair to inspect the bread. Wine is nowhere to be seen.

The apostles` feet do not match up with the bodies. There are eight pairs of legs shown

'I am doing a thing which you will dislike and justly. It belongs to my hosiery department. You will see I had four ideas, two of moments in the Last Supper and two of Christ with the soldiers and they were so consecutive and processional, I had to do them. They came out of their shell so nicely ...'

In the Last Supper painted in 1922, we see the sense of 'homeliness'  but in medias res drama within the homely setting: Christ and the disciples are seated on chairs which closely resemble those found in 'Fernlea', the Spencer home in Cookham but the  figures and chairs are in disarray

However at the lower end of the table, some of the disciples still lounge comfortably as they have not heard him

This seems to be the conclusion reached in Patrick J. Houlihan`s new book Catholicism and the Great War: Religion and Everyday Life in Germany and Austria-Hungary, 1914–1922

Here is a brief extract: 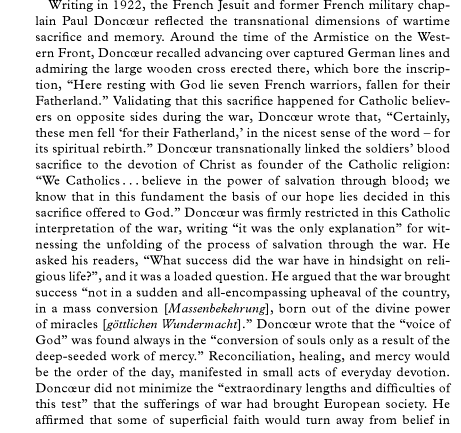