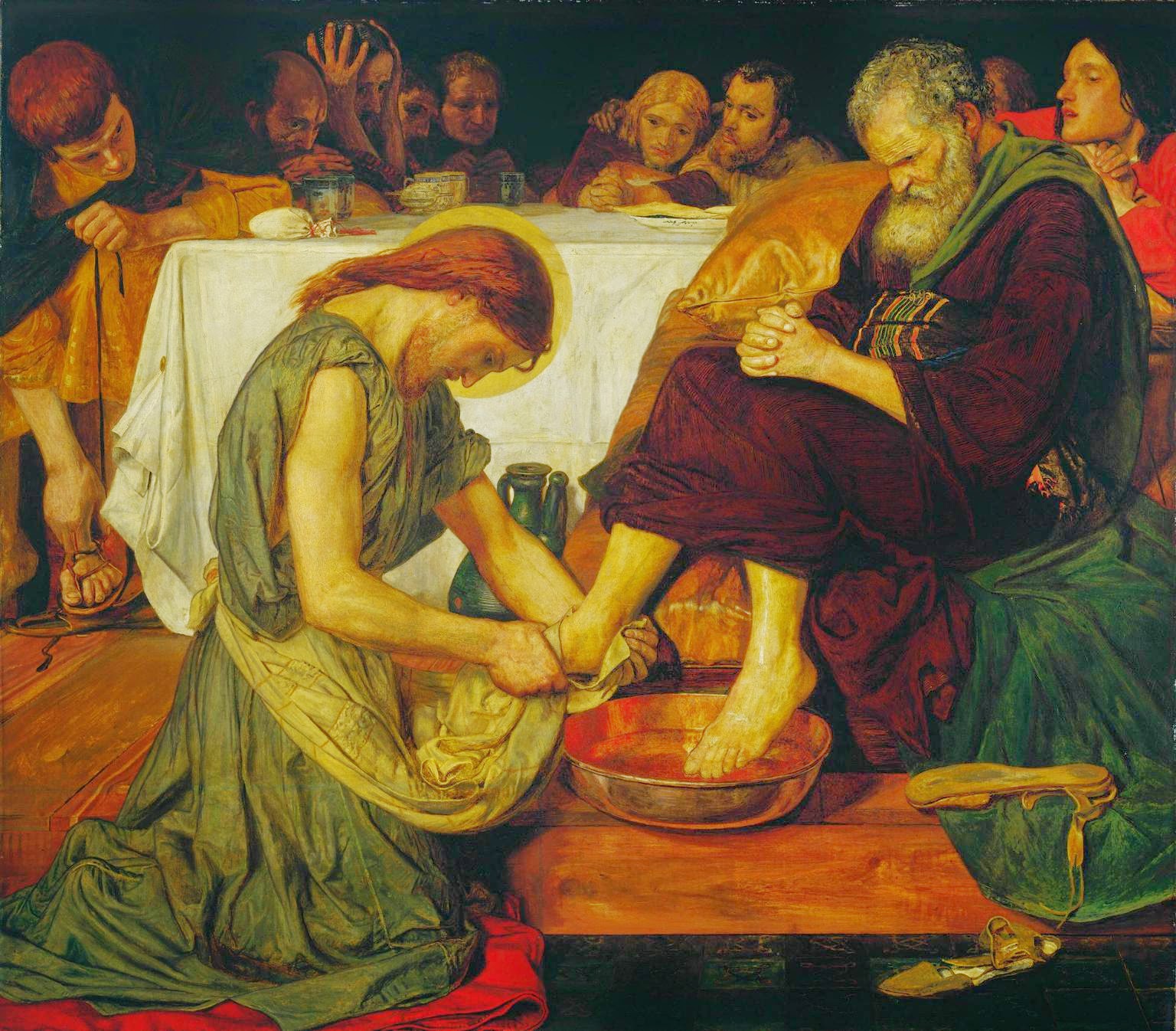 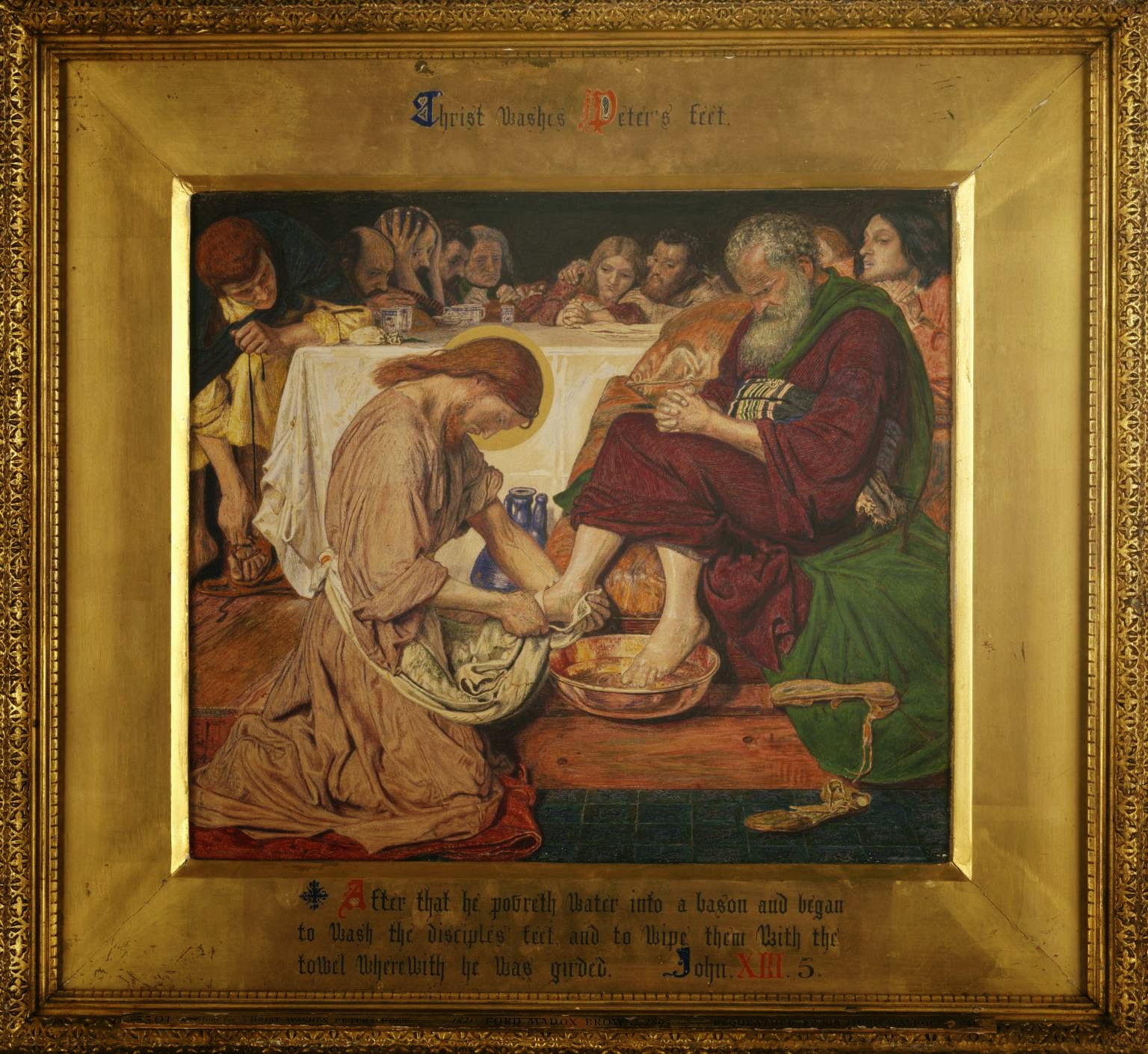 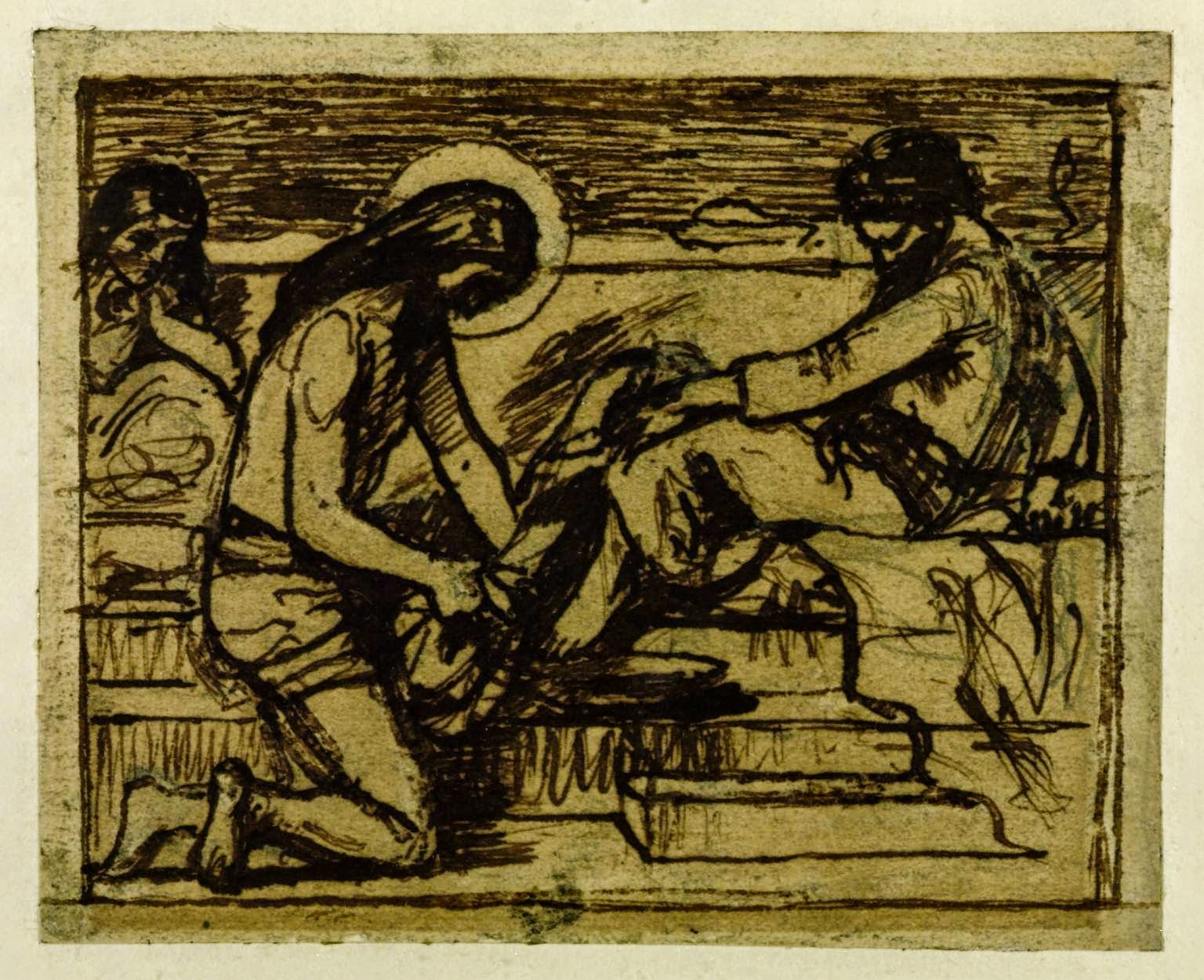 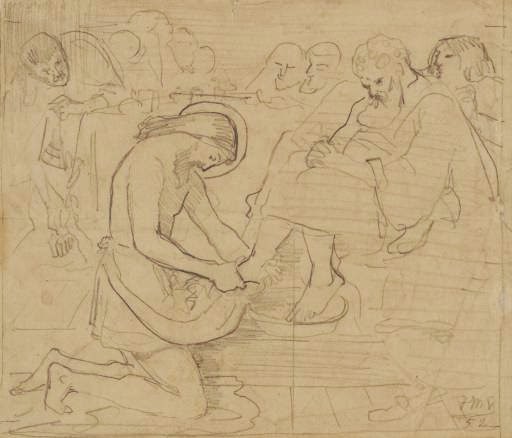 The Washing of the Disciples’ Feet.

1 Before the feast of Passover, Jesus knew that his hour had come to pass from this world to the Father. He loved his own in the world and he loved them to the end.
2 The devil had already induced Judas, son of Simon the Iscariot, to hand him over. So, during supper,
3 fully aware that the Father had put everything into his power and that he had come from God and was returning to God,
4 he rose from supper and took off his outer garments. He took a towel and tied it around his waist.
5 Then he poured water into a basin and began to wash the disciples’ feet  and dry them with the towel around his waist.
6 He came to Simon Peter, who said to him, “Master, are you going to wash my feet?”
7 Jesus answered and said to him, “What I am doing, you do not understand now, but you will understand later.”
8 Peter said to him, “You will never wash my feet.” Jesus answered him, “Unless I wash you, you will have no inheritance with me.”
9 Simon Peter said to him, “Master, then not only my feet, but my hands and head as well.”
10 Jesus said to him, “Whoever has bathed has no need except to have his feet washed, for he is clean all over; so you are clean, but not all.”
11 For he knew who would betray him; for this reason, he said, “Not all of you are clean.”
12 So when he had washed their feet [and] put his garments back on and reclined at table again, he said to them, “Do you realize what I have done for you?
13 You call me ‘teacher’ and ‘master,’ and rightly so, for indeed I am.
14 If I, therefore, the master and teacher, have washed your feet, you ought to wash one another’s feet.
15 I have given you a model to follow, so that as I have done for you, you should also do.
16 Amen, amen, I say to you, no slave is greater than his master nor any messenger greater than the one who sent him.
17 If you understand this, blessed are you if you do it.
18 I am not speaking of all of you. I know those whom I have chosen. But so that the scripture might be fulfilled, ‘The one who ate my food has raised his heel against me.’
19 From now on I am telling you before it happens, so that when it happens you may believe that I AM.
20 Amen, amen, I say to you, whoever receives the one I send receives me, and whoever receives me receives the one who sent me.”

The episode occurs in John at the place of the narration of the institution of the Eucharist in the synoptics.

In the version in the gilded frame of 1857 - 8, the artist has simply highlighted verse 5:

The act of washing another’s feet  was one that could not be required of the lowliest Jewish slave.

The verse is an allusion to the humiliating death of the crucifixion.

It symbolises cleansing from sin by sacrificial death.

As can be seen from the sketches, originally the figure of Christ was depicted as half clothed

Originally too the painting showed the same.

The painting remain unsold until Ford reworked the figure into robes

The artist, art critic and pre-Raphaelite Frederic George Stephens (1827 – 9 March 1907) was the man who posed for the figure of Christ

Stephens was so disappointed by his own artistic talent that he took up art criticism and stopped painting. He claimed to have destroyed all his paintings in 1850 before the creation of this work 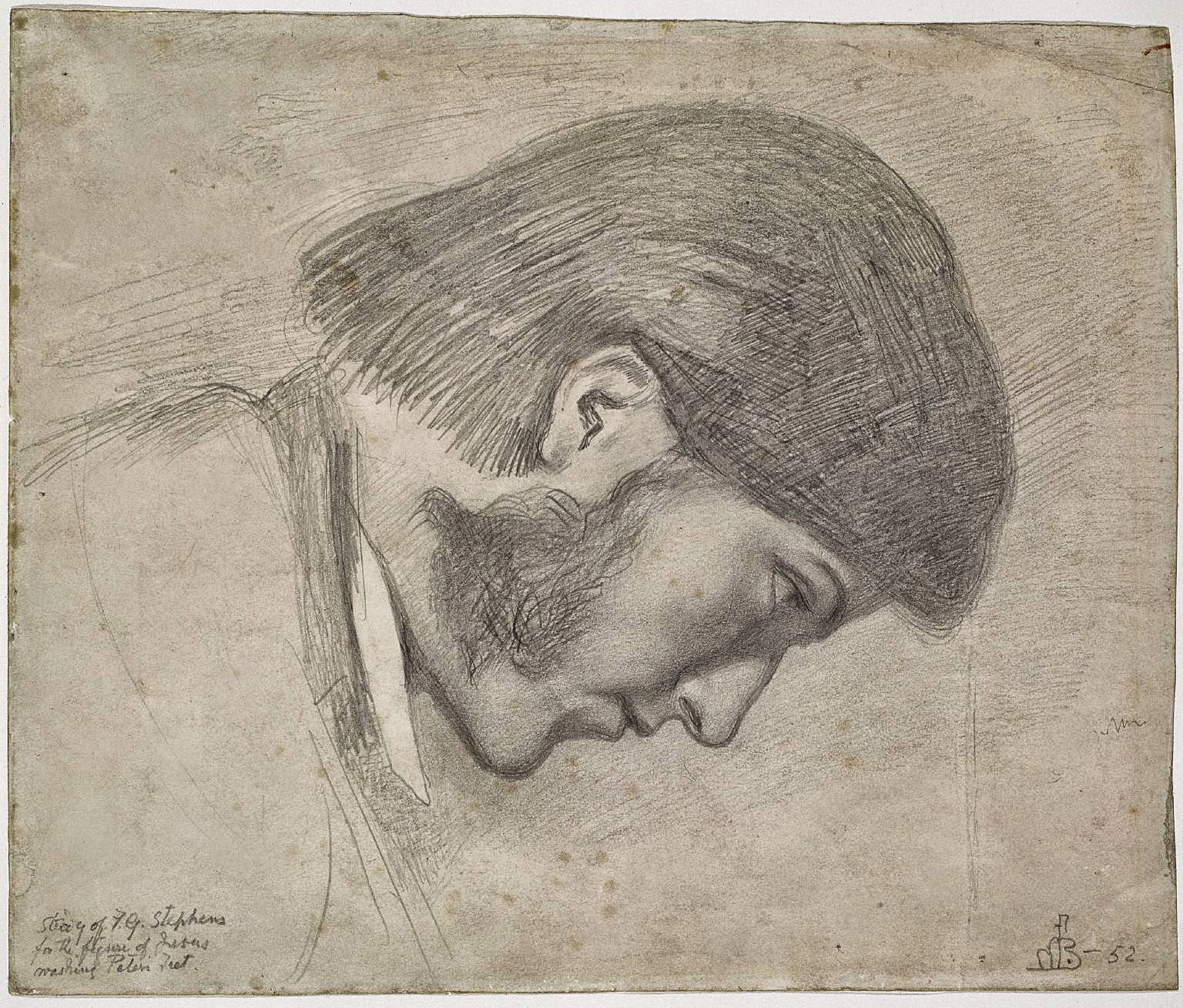 Other members of the pre-Raphaelites posed as Apostles

The second apostle on the left is William Michael Rossetti who later married Lucy Madox Brown, daughter of the painter

The blonde fellow in the centre is the poet Charles Bagot Cayley, and next to him on the right is Dante Gabriele Rossetti

Walter Howell Deverell is the figure of St John

The Pre-Raphaelite Brotherhood (later known as the Pre-Raphaelites) was a group of English painters, poets, and critics, founded in  by William Holman Hunt, John Everett Millais and Dante Gabriel Rossetti and later joined by others

Karl Marx and Friedrich Engels, working in London, had written The Communist Manifesto and published it in German in London on February 21, 1848

In Britain violence, and petitions of the Chartist movement came to a head with their peaceful petition to Parliament and meeting  on Kennington Common in  London on 10 April 1848

Like 120 years later it was a time of youth, energy and enthusiasm, a casting off of an old order and cast of mind

From their house journal The Germ: Thoughts towards Nature in Poetry, Literature and Art  it can be seen that their thought went beyond a return to  Quattrocento Italian art

Like Tractarianism, the PRB were for  a rejection of liberalism and latitudinarianism in favour of the traditional faith

It is no coincidence that the period  saw a crackdown on the Anglo-Catholics. The country was to be racked by the Gorham judgment which began its long progress in 1847 when Gorham was recommended for Brampford Speke but rejected by his Bishop

It was and is a long standing practice or discipline in the Catholic Church.

It was for some Protestant tastes too sacramental and Catholic. It was blasphemous

John Calvin had ridiculed the annual re-enactment by the Catholic Church on Maundy Thursday:

"The Papists boast that, by Christ’s example, they observe the forty days’ fast, or Lent.

But we ought first to see whether or not he intended to lay down his fast as an example that the disciples might conform to it as a rule. We read: nothing of this sort, and, therefore, the imitation of it is not less wicked than if they attempted to fly to heaven.

Besides, when they ought to have followed Christ, they were not imitators, but apes.

Every year they have a fashion of washing some people’s feet, as if it were a farce which they were playing on the stage; and so, when they have performed this idle and unmeaning ceremony, they think that they have fully discharged their duty, and reckon themselves at liberty to despise their brethren during the rest of the year.

But — what is far worse  — after having washed the feet of twelve men, they subject every member of Christ to cruel torture, and thus spit in Christ’s face.

This display of buffoonery, therefore, is nothing else than a shameful mockery of Christ.

At all events, Christ does not here enjoin an annual ceremony, but bids us be ready, throughout our whole life, to wash the feet of our brethren and neighbours."

The establishment of course later embraced them and their views became mainstream, the new orthodoxy

One  of the antiphons for the washing of feet on Maundy Thursday is Ubi caritas.

The opening words sum up the antiphon: "Ubi caritas et amor, Deus ibi est." (Where there is Love and Charity, there is God)

It is thought to date from the sixth century