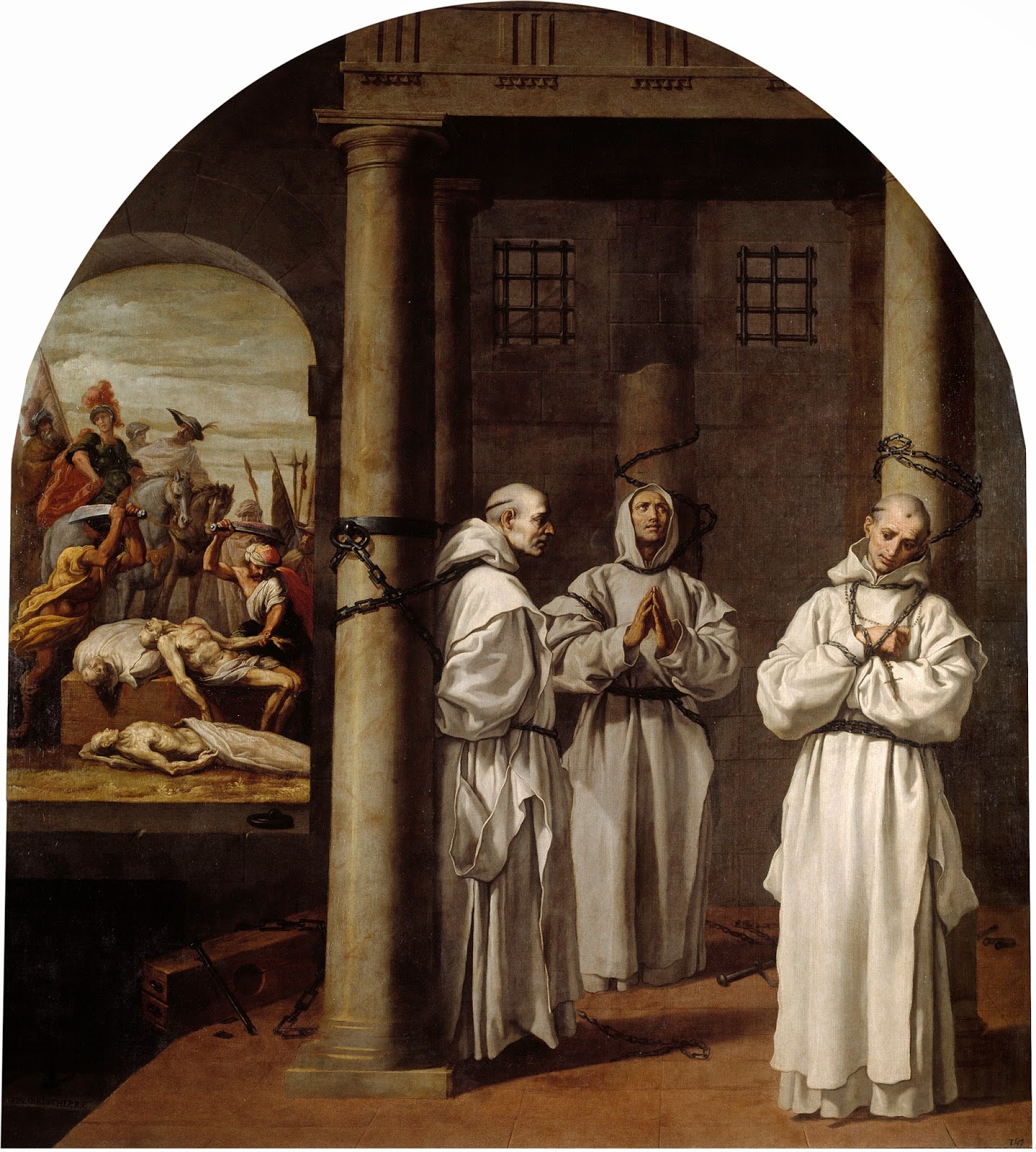 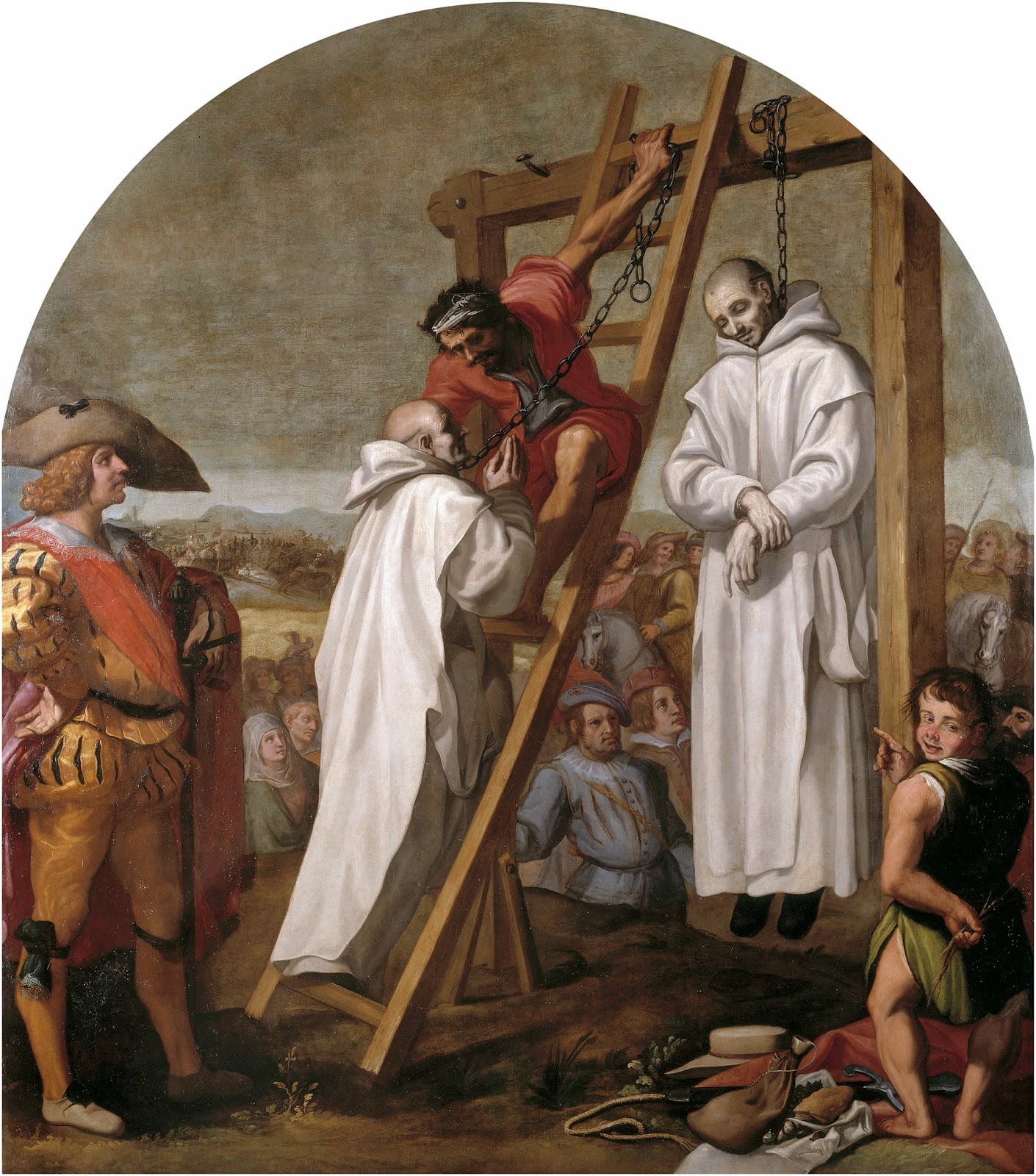 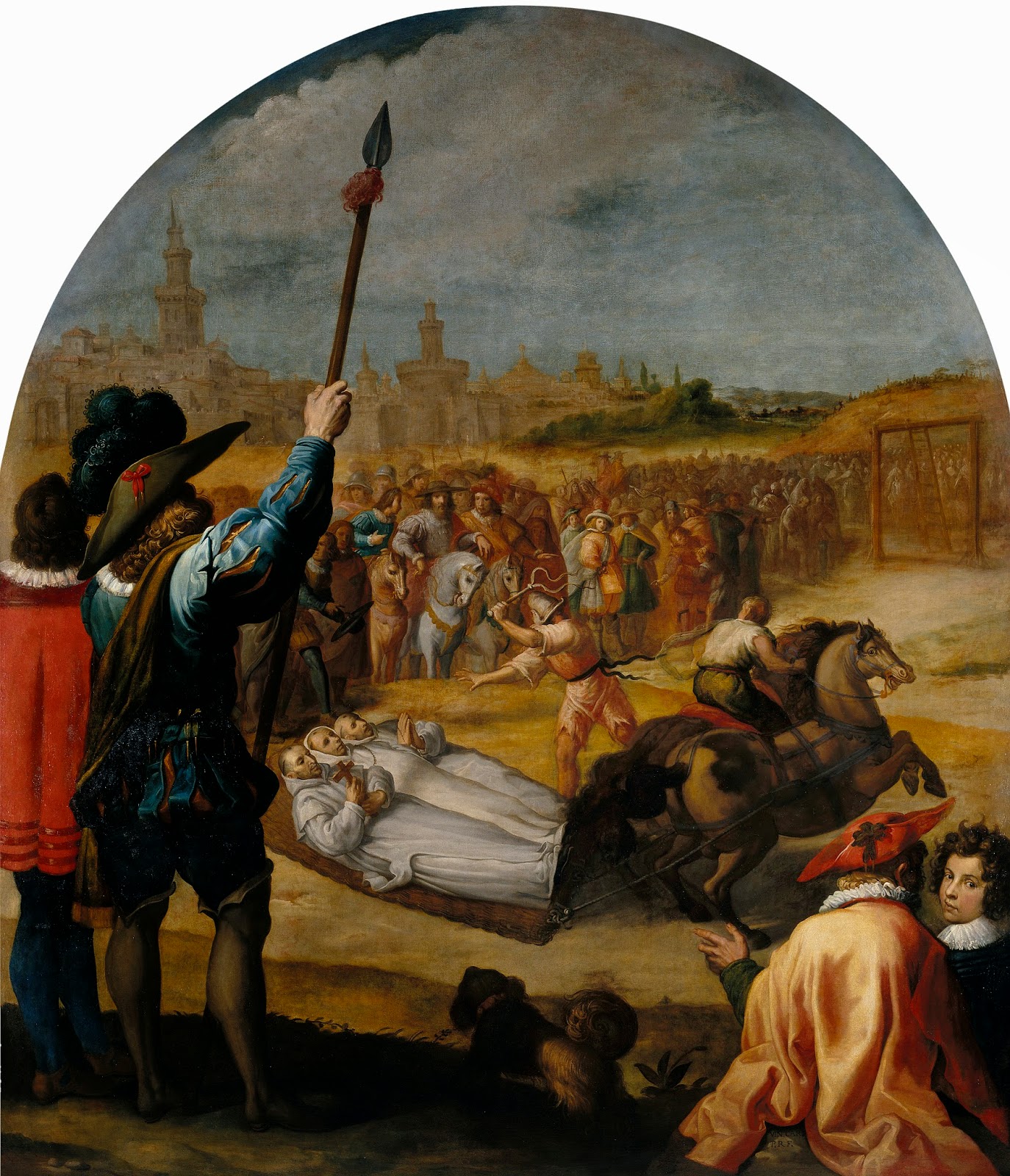 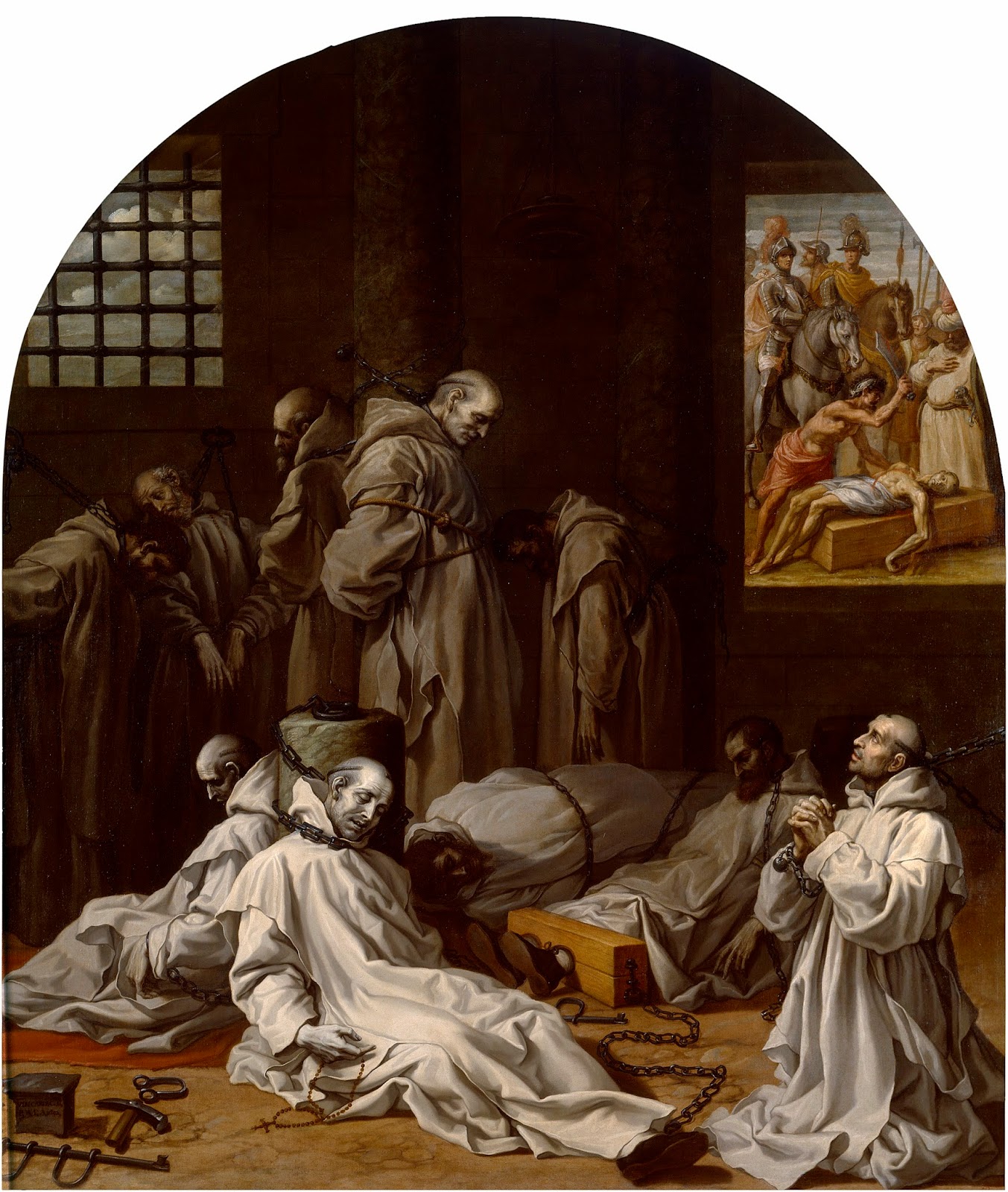 
On August 29, 1626, Vicente Carducho (c. 1576-1638), painter to King Philip IV of Spain signed the contract for which it undertook to make the cycle of paintings celebrating the foundation of the Order of the Carthusians by St. Bruno and its leading members

His Diálogos de la Pintura of 1633 championed Michelangelo and the Italian classical tradition while defending painting as a noble pursuit. The artist, wrote Carducho is a learned humanist, not just a craftsman; painters should uplift people morally.

The work was for the Cloister of the Cartuja de Santa María de El Paular, Rascafría, Madrid

It was for a series of fifty-four large canvases and two more, smaller, representing the shields of the king and the Order.

The cycle closes with a group of heroic scenes depicting episodes of persecution and martyrdom suffered by some Carthusian communities in the fifteenth and sixteenth centuries,

The work was supervised by the prior of the monastery, Father Juan de Baeza (died 1641),  who closely monitored compliance with the principles of the Order. Juan de Baeza gave the painter episodes to be included in the series, many of them unpublished or little known and for which there was no previous representations in Spain.

The London Charterhouse is a historic complex of buildings in Smithfield, London dating back to the 14th century.

It occupies land to the north of Charterhouse Square. The Charterhouse began as (and takes its name from) a Carthusian priory, founded in 1371 and dissolved in 1537. Substantial fragments remain from this monastic period, but the site was largely rebuilt after 1545 as a large courtyard house.

In 1537 during the English Reformation the London Charterhouse was dissolved and its members imprisoned and later executed.

Eighteen of these were beatified in 1886 by Pope Leo XIII; three of these (Augustine Webster, John Houghton and Robert Lawrence) were canonised in 1970 by Pope Paul VI with other English martyrs as the Forty Martyrs of England and Wales

In the first painting we see the imprisonment  of John Houghton, Robert Lawrence and Augustine Webster, priors of the Carthusian monasteries of London, Nottingham and Axholme respectively.

The place of imprisonment and death was the Tower of London

Saint John Houghton, O.Cart., (c. 1486-London, 4 May 1535) was a Carthusian hermit and Catholic priest and the first English Catholic martyr to die as a result of the Act of Supremacy by King Henry VIII of England. He was also the first member of his Order to die as a martyr.

Saint  Robert Lawrence (died 4 May 1535) was hanged, drawn, and quartered at Tyburn for also declining to sign the Oath of Supremacy. His feast day is 4 May

Saint Augustine Webster was the prior of Our Lady of Melwood, a Carthusian house at Epworth, on the Isle of Axholme, in north Lincolnshire, in 1531.

In February 1535 he had been  on a visit to the London Charterhouse with his fellow prior, Robert Lawrence of Beauvale to consult the prior of London, John Houghton about the approach to be taken by the Carthusians with regard to the religious policies of Henry VIII when he was arrested by the King`s men

In the second painting, we see the hanging of the Carthusians Blessed  John Rochester and Blessed James Walworth both of the Charterhouse of London

They had been taken north as prisoners

They were brought from Hull to York and brought before the Lord President of the North, the Duke of Norfolk, on trumped up treason charges. Condemned to death, they provided the Tudor propaganda spectacle for the city when on 11 May 1537 both were hanged in chains from the city battlements until their bodies fell to pieces

In this work Carducho highlights the two characters in the foreground. To the left is a sort of soldier in colourful uniform colorful which n the painter repeated in various compositions. On the right a young somewhat strange character  introduces the viewer into the story

In the third painting we see the death of Humphrey Middlemore, William Exmew and Sebastian Newdigate, three young men of proven training and belonging to the English aristocracy and all Carthusians

Humphrey Middlemore, O.Cart, (died 19 June 1535) was an English Catholic priest and Carthusian hermit, and was beatified by Pope Leo XIII on 9 December 1886.

Sebastian Newdigate, O.Cart., (7 September 1500 – 19 June 1535) was the seventh child of John Newdigate, Sergeant-at-law. He spent his early life at court and was a friend of King Henry VIII, and later became a Carthusian monk. He was also executed for treason on 19 June 1535 for his refusal to accept Henry VIII's assumption of supremacy over the Church in England and  was beatified by the Catholic Church

He  was visited in prison  by the King, who is said to have come in disguise, and to have offered to load Newdigate with riches and honours if he would conform. He was then brought before the Privy Council, and sent to the Tower of London, where Henry again visited him, but was unable to change his mind.

In the last painting we see the final moments of long imprisonment of members of the Carthusian community in London, chained and dying one by one through the long hot summer months by disease and starvation for refusing to abide by the Act of Supremacy. In the background, the death of the Carthusian Blessed William Horne

Horne was the last London Carthusian executed. He was a lay Carthusian

He was executed at Tyburn with Edmund Brindholme, an English Catholic priest and chaplain to Lord Lisle in Calais, and Clement Philpot, a servant of Lord Lisle. Brindholme and Philpot had both been attainted for betraying England by offering assistance to Cardinal Reginald Pole