Killing children and the helpless 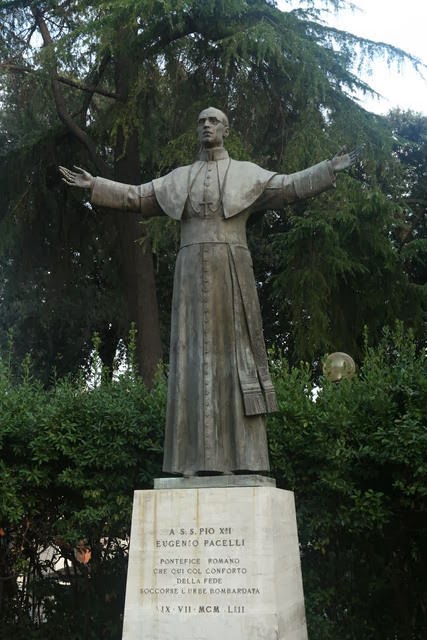 Statue of Pope Pius XII commemorating his visit to the Quartiere San Lorenzo in July 1943  in Rome after the Bombing in the Second World War
1953
Basilica di San Lorenzo fuori le mura, Rome


In the middle of the Second World War, Pope Pius XII issued a courageous denunciation of the ongoing Nazi euthanasia program, under which disabled Germans were being removed from care facilities and murdered by the state as "life unworthy of life".

Impelled by his revulsion at what he saw as a grave moral evil and crime, at considerable personal danger to himself and others in the Church, he wrote:

Conscious of the obligations of Our high office We deem it necessary to reiterate this grave statement today, when to Our profound grief We see at times the deformed, the insane, and those suffering from hereditary disease deprived of their lives, as though they were a useless burden to Society; and this procedure is hailed by some as a manifestation of human progress, and as something that is entirely in accordance with the common good.

Yet who that is possessed of sound judgment does not recognize that this not only violates the natural and the divine law [Decree of the Holy Office, 2 Dec. 1940: A.A.S., 1940, p. 553] written in the heart of every man, but that it outrages the noblest instincts of humanity?

The blood of these unfortunate victims who are all the dearer to our Redeemer because they are deserving of greater pity, "cries to God from the earth."[Gen., IV, 10]

The denunciation by Pope Pius XII was followed, on 26 September 1943, by an open condemnation by the German Bishops which, from every German pulpit, denounced the killing of "innocent and defenceless mentally handicapped, incurably infirm and fatally wounded, innocent hostages, and disarmed prisoners of war and criminal offenders, people of a foreign race or descent"

Unfortunately today, the Belgian Parliament has approved a law allowing euthanasia for terminally ill children without any age limit

Last week 160 Belgian paediatricians signed an open letter against the law, claiming that there was no urgent need for it and that modern medicine is capable of alleviating pain.

The Catholic Church in Belgium would appear to be moribund in a State devoid of all  reason, moral sense and charity

It also seems strange that the death of one giraffe in a zoo in Copenhagen can attract more attention and condemnation than this horrific Belgian legislation
Posted by Unknown at 9:24 pm