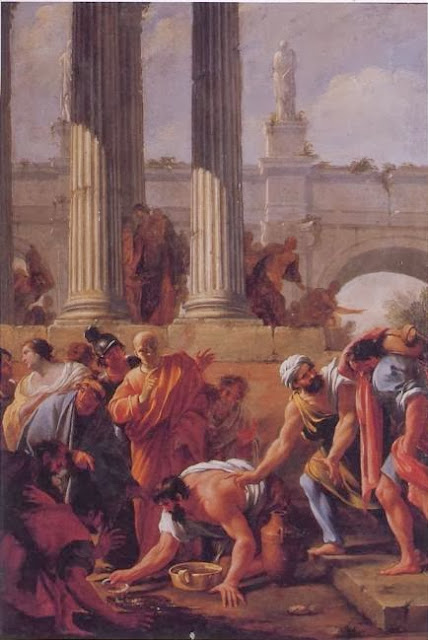 He was certainly celebrated while he was still alive

This is an early work when he was still under the influence of Vouet. Later he went to Rome in 1642 and worked under Poussin

The importance of the event is such that one whole chapter in Acts (Acts 10) is given over to relating it: the baptism of the Roman centurion Cornelius, the first Gentile and non-Jew to be baptised

The incident is again related in Acts 11:1–18 where Peter is forced to justify his actions before the Jerusalem community and alluded to in Acts 15:7–11 where at the Jerusalem “Council” Peter supports Paul’s missionary activity among the Gentiles.

The narrative concludes with Peter’s presentation of the Christian kerygma (Acts 10:4–43) and a pentecostal experience undergone by Cornelius’ household preceding their reception of baptism

"15 As I began to speak, the holy Spirit fell upon them as it had upon us at the beginning,
16 and I remembered the word of the Lord, how he had said, ‘John baptized with water but you will be baptized with the holy Spirit.’
17 If then God gave them the same gift he gave to us when we came to believe in the Lord Jesus Christ, who was I to be able to hinder God?”
18 When they heard this, they stopped objecting and glorified God, saying, “God has then granted life-giving repentance to the Gentiles too.” "

It was a very controversial act in its time. Its legitimacy was only settled by the Council of Jerusalem

Joseph Wilpert (1857 - 1944) in I sarcofagi Cristiani Antichi (1929, 1932)  and his other works is at pains to emphasise the frequency of the depiction of the scene and therefore its significance in the early Church

"In Rome Christians converted for the most part from being pagan ...

It is therefore no wonder that the baptism of Cornelius became in the art found in cemeteries the scene which far exceeded in number all other scenes . In sculpture alone there are at least one hundred known examples ... and we shall be adding another twenty examples hitherto unpublished."

Here are some examples 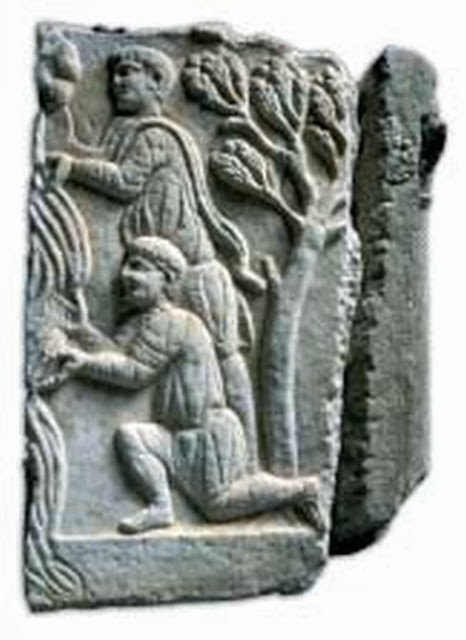 Sarchophagus of the handing of the law to Peter
With separate panel showing the Baptism of Cornelius and the miraculous source of the living water
White Carrara marble
4th century
Musée départemental Arles antique, Arles, France

On the arrival of Peter, Cornelius prostrated himself before him

Like Moses, Peter carries a rod similar to that of Moses with which he performed the miracle in the desert

Cornelius is dressed in the armour of the centurion. Other soldiers from his regiment can be seen 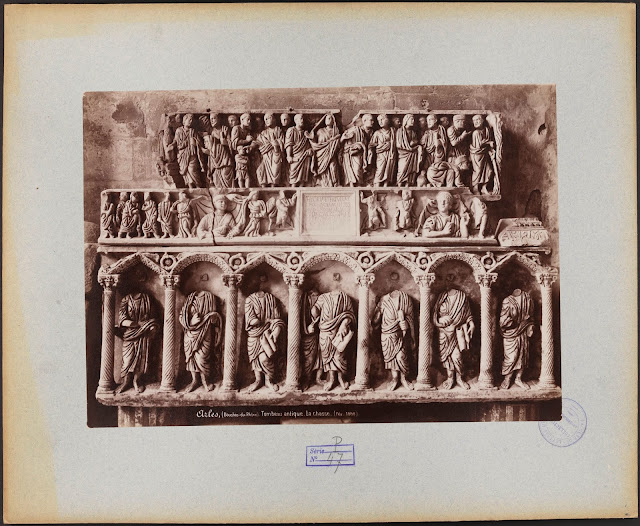 
In this photograph image of a 4th century tomb in the Musée départemental Arles antique, Arles,  the scene between Peter and Cornelius is on the top right of the sarcophagus 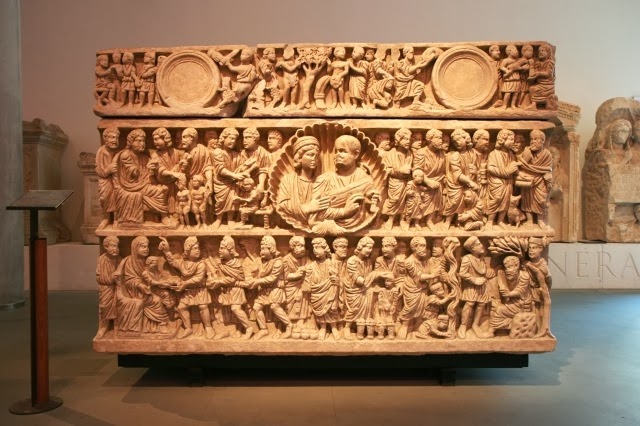 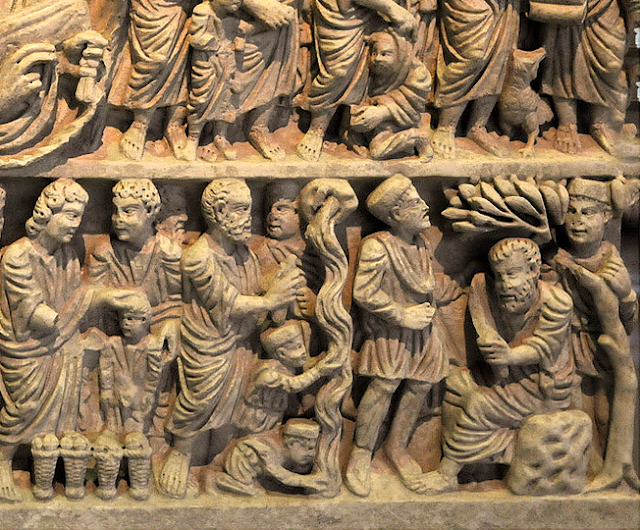 This was one of three sarcophagi discovered in Trinquetaille, Arles in 1974

The sarcophagus has scenes from The Old Testament, the mirac;es of Christ and scenes from the life of St Peter

Peter is depicted as "the new Moses": the receiver and giver of the Law and the means by which the Source of the Water of Life is discovered

Without the vision and the revelation the Christian Church would have been very different
Posted by Unknown at 11:10 pm